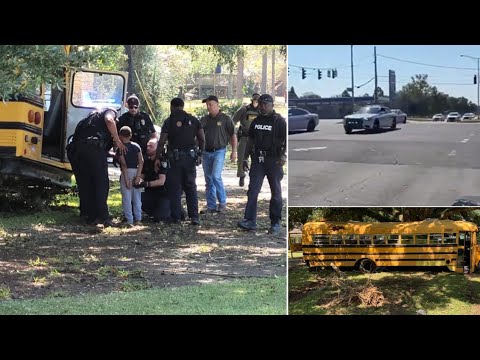 The Baton Rouge Police Department responded to reports of a stolen school bus being driven by a juvenile.

The 11-year-old allegedly took the bus from Progress Head Start where he got in the bus and figured out how to start it. BRPD says they believe it is a push to start.

The juvenile was handcuffed after being taken off the bus. BRPD states the bus was stopped around 1700 Greenwell Springs Road.

BRPD has charged the 11-year-old juvenile with theft of a motor vehicle, aggravated flight, three counts of aggravated damage to property, and aggravated assault.

YOU MAY ALSO LIKE  Muslim Group Speaks On Fulani Planning To Install Emirs In Enugu, Osogbo, Others

Dozens of police officers were in pursuit of a stolen school bus that is believed to have been a juvenile driving it.

One witness said the bus and the line of pursuing police cars passed him along Government Street in Baton Rouge Sunday morning.

A BRPD spokesman said the chase began around 10:45 a.m. and has crossed multiple portions of the city Scenic Highway, Airline Highway and Greenwell Springs Road.
Officials state they are unsure where the child got the bus.

The post 11-Year-Old Boy Steals School Bus, Crashes It During Chase By Police In US (Photos) appeared first on .