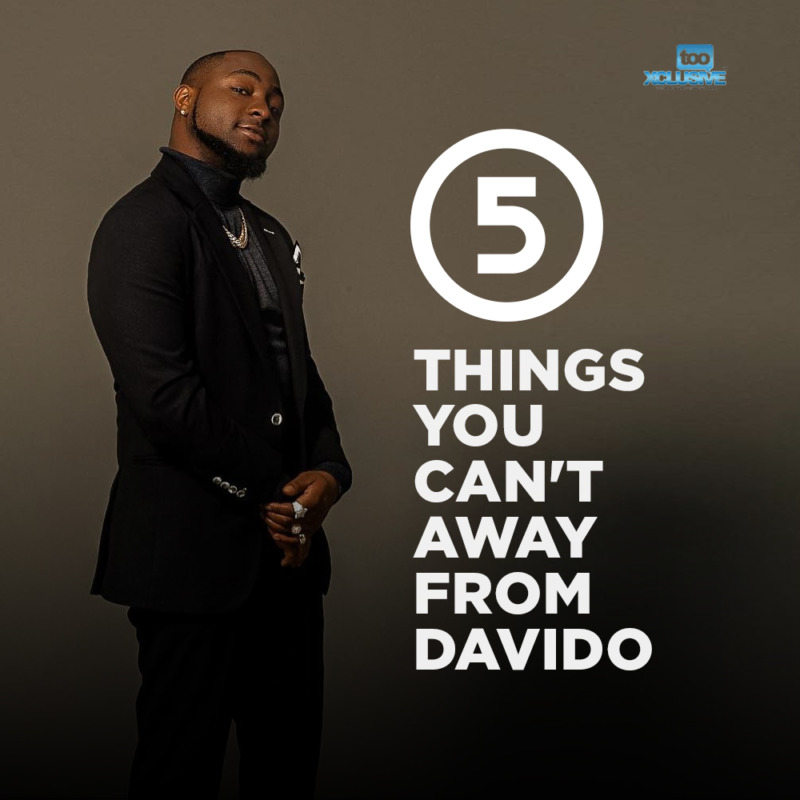 You can’t mention big names in the Nigerian music industry without pointing out Nigeria Hottest Music “Davido”. David Adedeji Adeleke, also known as  OBO (Omo Baba Olowo) is one of the industry’s Giants. Starting his career at a very tender age, you could say that the award-winning singer has grown before our very own eyes.

10 years in the game is enough for us to point out traits that can never be taken from him. It’s quite easy to deduce these traits because he’s like an open book. In this article, we would be listing 5 things that can’t be taken away from Baba Imade.

Be it a local or international collaboration, Davido makes sure to use his slangs/music signature in his songs. They are used to announce his presence on a track, spice up the track, or end the track. We feel Davido uses this to show his fans that it’s nothing too serious from his end. He’s just trying to have fun. There is hardly any record by the DMW boss, either his personal songs or features that these chants are not used. Songs like ‘Nwa baby’,’FIA’, ‘Flora my Flawa’, and many others are records where both slangs were used. Shekpe, OBO Baddest/ OBO. The list is endless.

Davido might not be able to hit a high note perfectly like the likes of Wande Coal or Oxlade but he sings with so much passion that you forget that he can’t actually  — um — sing. His singing skills are on the level any one of us could easily achieve with the help of singing lessons from a good vocal coach but he sure does know how to market himself. (Ever wondered how he earned the nickname that must not be named?)

The sad truth is that most times, the “greats” are not all that great. Marketing plays an enormous role in everything and the music industry is not left out. A great singer who can’t sell him/herself perfectly will never become famous. But an average singer who knows how to generate publicity can become a superstar overnight and Davido is just like that.

Nigerians don’t seem to care and in fact, they have defended him despite knowing this fact which is why he is one of the most loved and most hated artistes in the country. In almost every track, Davido puts in all his best and was sure some veins must have popped while recording in the studio and of course while performing on stage. But that’s a talk for another day. It’s part of his signature and what makes him unique as a superstar.

Sometimes it’s cool and sometimes it’s audio terrorism but as stated earlier fans love him that way. Singing in high notes is what he loves and it can’t be taken away from him.

On the 3rd of June, 2020, the singer shocked fans after revealing that he would be taking a break from the music scene and would be back in July for the release of his album “A Better Time”  “Pls understand… see you when I drop ABT”

Pls understand… see you when i drop ABT

That must have been a very hard decision to make because prior to this we know Nigeria Hottest Music “Davido” never leaves social media; the man is basically always on the phone. Say some shady stuff about him? The singer is always online to fight and because of this, he is always in the news both for the wrong and right reasons.

One of the incidents that got fans amazed was his quick response after being accused of impregnating a lady back in 2019. The internet had gone agog after two ladies identified as Helen and Susan took to social media to disclose that the singer had put one of them in the family way. Of course, it was a blatant lie but Davido’s response was way too swift.

You might argue that he had to refute the bogus claims because he had just welcomed his first son and third child with his fiancee, Chioma Rowland but as we said earlier, it was super fast. We’re not going to leave out the comments he drops after a blog shares a story about him. Most of the time he is always the first to comment and sometimes we can’t help but wonder, what does he really do aside from social media?

Social media is also a tool for the singer to connect with his fans. He is currently the most followed Nigerian celebrity with a total of 17.1 million followers at the time this article was collated and this didn’t happen in one day.

Davido’s lavish and flamboyant stories and pictures are something fans look forward to – it’s not for the faint-hearted. Every day we get to see how the singer carries out his daily activities. From hanging out with his gang, touring around the world, making music, and even buying ridiculously expensive jewellery, Davido makes sure to keep his fans entertained.

Nigeria Hottest Music “Davido” doesn’t just have hits, he has mega-hits and we’ve come to see that he’s a constant megahit maker- he can’t seem to help it. The multiple chart-topping award-winning singers has blessed the eardrums of fans with music that has gotten them either wanting to fall in love or simply getting their groove going on the dance floor. Here are some of his hits below:

This is one of the many songs that established Davido as a force to be reckoned with in the Nigerian music industry. The track accompanied by a dance step made it spread like wildfire and turned into a mega-hit immediately.

‘Assurance’ was released as an ode to his now-fiancee, Chioma Rowland, after gifting her a 30 million naira car gift. With this track, Davido who has been in several relationships in the past reaffirmed that true love still exists.

An instant hit, the song upon release immediately climbed every major music chart in the country and even out of the country. Fia presently has 70 million views on YouTube and remains one of the singer’s most featured songs.

This was where the catchy lyrics ‘30 billion for the account o’ was birthed. The success of this melodious and infectious megahit surprised everyone and even the singer himself. This is one of the songs that took the singer out of the continent.

Released in 2017, this mega-smash hit-song was his main introduction to the foreign audience.  Fall climbed to the number one position on Most Shazamed song in New York, US, and featured on the Billboard most listened to RnB songs in the US for 2018. The music video also has over 150 million views on YouTube. The list of achievements this track has amassed to date is endless.

YOU MAY ALSO LIKE  RAVE MIXTAPE BY DJ TOF || @djtofmusic

Listing Davido’s Mega Hits without “Dami Duro” can be considered a crime. The mega-hit track is from the singer’s debut studio album “Omo Baba Olowo (OBO)” which was released in 2011. The track was used to announce his presence in the Nigerian music industry and to date, it considered as one of the biggest hits out of the country.

Asides from releasing hits upon hits and mega hits, Nigeria Hottest Music “Davido” is adept at giving out top-notch music videos. The singer spares no expense in bringing life to his lyrics with visuals that would make you love his songs the more even if you hate them. We’ve seen the singer since the beginning of his career release nothing but dope videos directed by the best of the best in the game. Visuals like “Blow My Mind,” “Skelewu,” “Risky,” “D&G.” and many others would make you agree that he’s one of the few artistes that takes time to release music videos.

Did we miss anything out? Do let us know in the comment section below