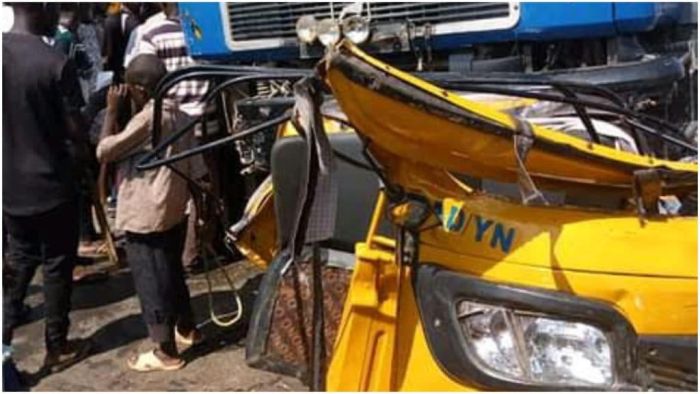 The Adamawa State Police Command has confirmed that eight persons were critically injured after a truck ran into eight stationery commercial tricycles (Keke NAPEP) in the Adamawa State capital, Yola.

The incident occurred on Tuesday evening at a bridge that separates Yola North from neighbouring Girei Local Government Area.

Speaking with 9JAUPDATE247 Wednesday morning, the state police command said a prior accident to which police responded was what built up to the second and more severe accident

The Command spokesman, DSP Sulaiman Nguroje, said in the text message, “On 12/11/2019; one Abubakar Ahmed, a rider of tricycle Reg No JAD 051 VV, along Veniklang Bridge, had a self accident as a result of tyre burst.

“When policemen from Central Motor Traffic Division visited the scene to render the victims first aid and clear the road of obstruction, hoodlums attacked the police patrol vehicle, which resulted in traffic congestion.

“There and then, a tipper with reg no KTG 12 XA, driven by one Musa Mohammed, lost break and hit eight tricycles where eight persons sustained injuries.”

He added that the injured had been taken to hospital and that the police command was able to bring the situation under control and had since commenced a full investigation into the matter.