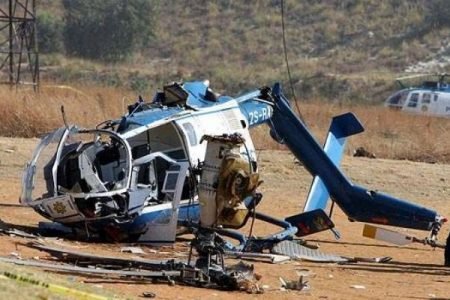 In what will come across as a really startling development, two helicopters carrying soldiers have crashed, killing people on-board, NAN reports.

The two helicopters crashed on Wednesday  in Afghanistan’s southern province of Helmand, killing nine people aboard, the ministry of defence said.

In a statement, the ministry said that the helicopters crashed overnight due to technical issues while taking off, the incident is under investigation.

Two local officials told dpa that the helicopters collided while they were evacuating wounded soldiers from a battleground in the province’s Nawa district and were forced to land immediately.

According to local media, they were on a mission to send reinforcements to the district and carry out wounded soldiers.

For a week, Taliban militants have been attacking various parts of the southern province including the capital city of Lashkargah, amid no apparent progress in intra-Afghan peace talks.

The insurgents have cut the power supply to the city and the roads have been bombed, while the government’s Special Forces are hitting Taliban positions from the air and ground.

The violence has taken a toll on both civilians and military personnel, but no exact number has been published yet.

Around 35,000 people have fled heavy fighting in Helmand province in recent days, with the United Nations estimating on Tuesday that around 200 have been killed or injured during the massive Taliban offensive.

YOU MAY ALSO LIKE  247News: SHOCKING! Again, B’Haram Releases Video of Victory Over Nigeria Army [See How they Dealt with Soldiers]