Controversial radio and television personality Afia Schwarzenegger has taken to social media to show off her dad after her former friend and partner in crime Nana Tornado revealed he is poor and struggling to survive.

Days ago Nana Tornado and another former friend of Afia Schwar in the person of Mzbel teamed up to blast her for telling lies about the latter including sleeping with her sugar daddies and boyfriends.

In the live video, Tornado used the opportunity to speak about the Afia Schwar revealing that he biological father based in Kumasi is now a pauper because he has been neglected by Afia.

According to him, the man Afia has been posting on her social media as her father isn’t but rather he is the boyfriend of her mother. He continued that her biological father is 82-year-old and shop attendant at someone’s drugstore in Atonsu.

But Afia Schwar has responded by sharing photos of the same man Tornado claim to be the step father.

She added the caption: “Take good care of your parents n God in heaven will bless you!!!! My daddy my photocopy. I remember the morning we were wheeling you to the theater… it was raining heavily at korle bu n I was tearing.. you held my hand n prayed for us..you asked God to reward me for every coin I have spent
Thank you daddy .. today Facebook reminded me of this day n the Holy Spirit whispered unto my soul,your daddy is still alive and all his prayers for u has been answered.
God bless you Agya Kojo Agyei… your prayers have made us come far.
Once again congratulations daddy, wo tri nkwa.
We are grateful to God for having you here n oh all the jokes you tell ..
We are grateful to the drs n Nurses of Korle bu teaching hospital for everything you did for daddy.
Happy anniversary, Happy recoversary…still surprising medicine!!!! 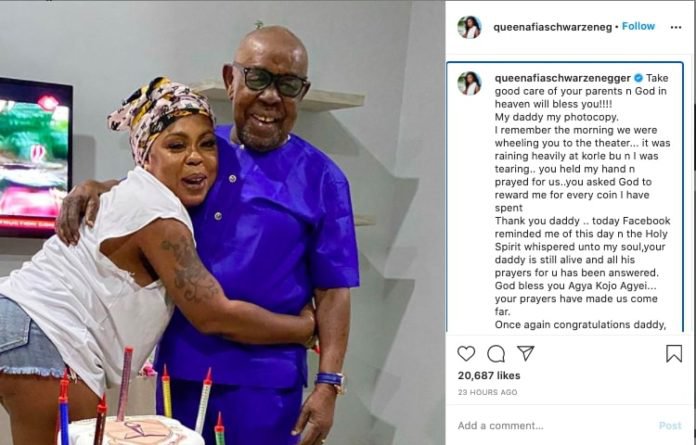 The post Afia Schwarzenegger flaunts papa after Nana Tornado claimed he is a poor man in Kumasi appeared first on illuminaija.