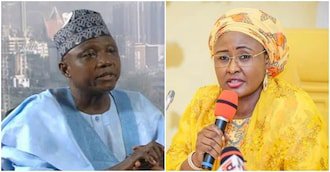 The wife of the president, Aisha Muhammadu Buhari on Wednesday, December 11, released a statement accusing a presidential aide, Mallam Garba Shehu, of committing some infractions which violate his duties.

In the statement on Daily Trust titled: “Garba Shehu has gone beyond his boundaries”, the wife of the president claimed the Garba Shehu was working against the presidential family.

Aisha Buhari alleges that Garba Shehu working against the presidential family
Here are some of the key accusations Aisha Muhammadu Buhari made in the statement about Garba Shehu.

2. In another accusation, the wife of the president claimed that Garba Shehu had shifted his loyalty to some personalities within the corridors of power outside President Buhari. She said he had presented himself to the power brokers as a willing tool and executioner of their antics.

3. Aisha also claimed the presidential aide blatantly meddled in the affairs of a First Lady of the country.

4. The wife of the president in another claim accused Garba of sacking the media crew working in the office of the First Lady on the orders of Mamman Daura.

5. She also claimed Garba Shehu stated that the government will not allow the office of the First Lady to run.

6. She said the presidential aide embarked on an orchestrated media campaign of calumny by sponsoring pseudo accounts to write and defame her personality and those of her children.

7. Aisha Buhari also alleged that Garba Shehu has a misguided sense of loyalty and inability to stay true and loyal to one person or group.