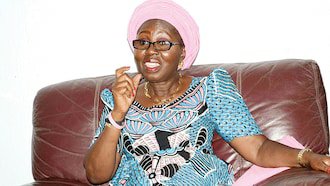 A report by Tribune Online indicates that a government official who pleaded anonymity on Thursday, June 2, confirmed that the wife of the Ondo state governor, Betty Akeredolu, has been confirmed positive for COVID -19.

It was gathered that the official said the samples of the First Lady which was collected two days ago and one of the security aides of the governor returned positive this morning.

The medium noted that the source, however, said the First Lady has embarked on self-isolation but said: “We are still awaiting the results of some media aides of the governors and some commissioners who interact with the state governor regularly.”

YOU MAY ALSO LIKE  THE TRUTH!! Chelsea Board Members Explains Why Abramovich Purchased The Club In 2003

He said a similar test would be conducted on the members of the House of Assembly and the traditional rulers who endorsed the second term ambition of Akeredolu in Akure recently.