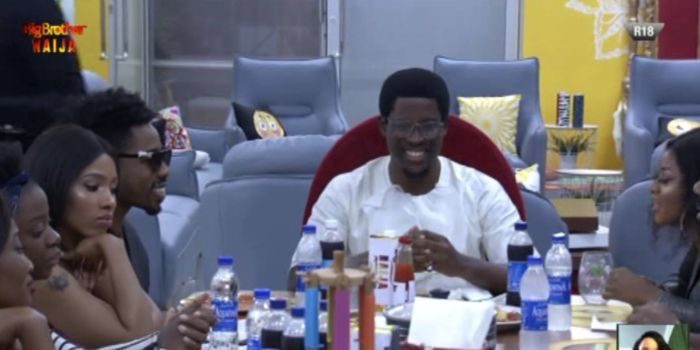 The Big Brother Naija housemates were surprised after seeing Seyi and Tacha returned to the house on Wednesday.

Seyi and Tacha had been in a secret room after their fake evictions on Sunday, which was unknown to other housemates.

News of a possible celebrity guest in Biggie’s House had the housemates filled with excitement. It was supposed to be their first guest in the house, but the organizers decided to shock the ‘Pepper Dem’ gang with the return of Seyi and Tacha.

The housemates had put things in place the best ways to impress their “special” guest. Some of them stormed the kitchen acing their culinary skills, while others tidied up the House.

Jeff and Khafi had speculated Don Jazzy to be their guest.

Imagine spending time prepping for some guests you’re so much looking forward to receiving, only to realise that they are people you had hoped to have said your final goodbyes to.

YOU MAY ALSO LIKE  247E!news: See Photo of Psquare’s Paul Okoye Caught With a Policeman in Lagos Traffic

Tacha and Seyi were met with loud and joyous screams but it was a case of when your face betrays you for a lot of the Housemates.

With all the smiles flashing about, it’s kind of hard to tell who had a second thought about this return. But our roving eyes caught Thelma, Esther, and Diane who had to hug Seyi first before recognizing Tacha. Or maybe they just didn’t know.

Even Ike’s hug was a brief one. Wait a minute, weren’t Frodd and Jeff in the room when their distinguished visitors entered? They seemed to have disappeared amidst the other Housemates who were eager to catch a glimpse of the guests.

For Mercy, it was as if the dead had risen. She quickly became a classic case of if looks could kill when she laid her eyes on Tacha.

How about Sir Dee, Nelson, and Gedoni? We tried to find out which one of these appeared the most excited, but we couldn’t. The real motive behind those broad, flashy smiles could not really be determined.

YOU MAY ALSO LIKE  So Sad: Nollywood Actress Shan George Loses Sister In An Accident

However, after enjoying the reunion meal, Tacha and Seyi read a letter addressing each of the Housemates. Seyi managed to deliver his with just enough diplomacy and a touch of spice. But Tacha did not hold back.

In true Port Harcourt’s first lady style, she was frank, brief and even went in for Jackye. “You are you,” she asserted, with just enough spice in her tone.