Berla Mundi with a post on her Instagram page demonstrated how far she has come in her career in showbusiness.

In a collage of a throwback picture from her Miss Malaika days and a recent photo of her at an award show, she got her fans and followers cracking up.

After her 5-year stay with GhOne, a subsidiary of the EIB Network, Berla currently works with TV3 where she hosts the famed Day Show.

Berla shared a collage of a picture from a performance during her Miss Malaika days pieced together with a recent picture of her at the 2020 edition of the Ghana Women Awards event where she was awarded the Young Star of the year.

YOU MAY ALSO LIKE  BREAKING: Delta Records Third Case Of COVID-19

Her post was wittily captioned, ”How it started vrs how it’s going ?Please block Giovanni from my page ok ?#missmalaika2010#glitzwomanoftheyear.” 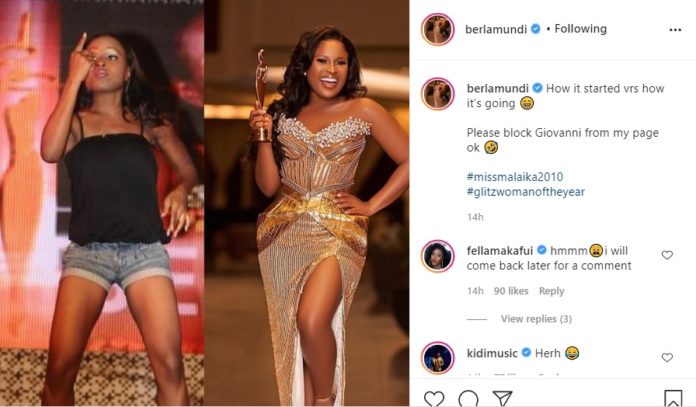 Nonetheless, Berla Mundi has reached a number of milestones in her short media career as she was recognized as the most influential Ghanaian in 2017 by Avance Media.

Also, in 2017 she won The Most Stylish Media Personality at the Glitz Style Awards Founded by Claudia Lumor.

YOU MAY ALSO LIKE  Adepa wins Ghana MTN Hitmaker Season 9 – Walks away with GH¢120,000 recording deal

The post Berla Mundi makes a joke out of her throwback photo from her Miss Malaika days appeared first on illuminaija.