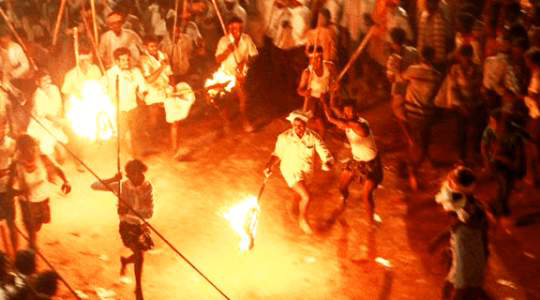 Celebrations are a way of human life. But some are so strange, it questions the very definition of the concept. The Bani Festival celebrated at the Devaragattu Temple in the Kurnool district of Andhra Pradesh illustrates the point.

Every Dusshera, hundreds of devotees from Andhra and Karnataka carrying long sticks known as lathis gather at this temple to hit each other on the heads at midnight.

Drenched in blood, these men go on with the celebration till the beak of dawn, to commemorate the killing of a demon by Mala-Malleshwara (Shiva). 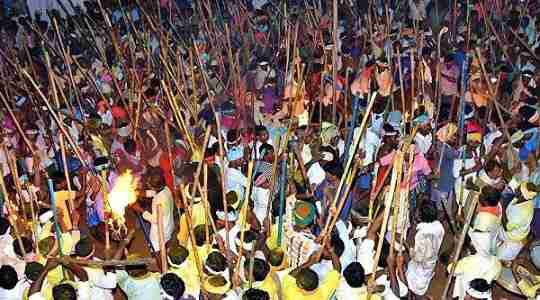 According to the temple priest, this festival has been celebrated for over 100 years, and earlier axes and spears were used instead of lathis. Temple authorities refute any suggestion of violence in the whole episode.

“It is like dandiya only that we use large sticks. Devotees are charged at that time and in the swirling of the sticks some get hurt,” Ramkumar Shastri, a priest at the temple said. “In olden days, it used to be axes, spears etc.”

56 people were injured in 2014 during Bani. Medical attendants and policemen are deployed during this festival but they mostly remain spectators, in the face of the extreme frenzy.

Men, mostly farmers, do not budge even as their white shirts are drenched red with blood and the “victory parade” to commemorate the killing of a demon by Mala-Malleshwara continues till the break of dawn. 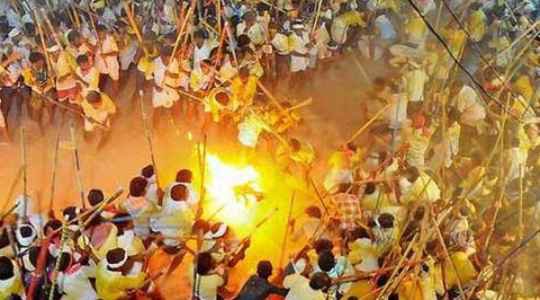 Medical teams are deployed and doctors ready to stitch heads but many just smear turmeric on the wound and go about the business.

The records though do not show many deaths. According to the district police, 113 were injured in 2012, 34 in 2013. A man was killed in 2006 but police say it was a revenge killing committed with the ritual as a cover-up.

The ritual in the region once under the Vijayanagara Empire is said to be centuries old and according to a local police official, has one hundred years of recorded history.

About 1,000 police personnel at the venue pf the festival are mostly limited to the audience as the sentiments and tempers run high.

The post BLOODY NIGHT! See The Indian Festival Where Hundreds Of Men Hit Each Other’s Heads With Long Sticks appeared first on illuminaija.