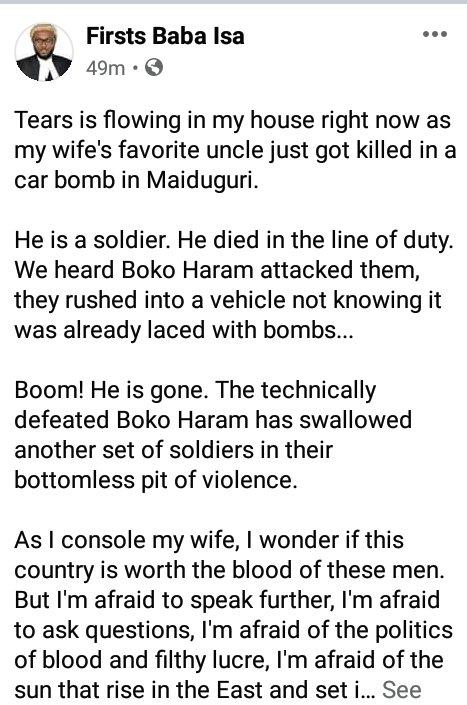 Several Nigerian soldiers have allegedly been killed in a car bomb carried out by Boko Haram terrorists in Borno State.

According to Nigerian lawyer, Baba Isa, whose brother-in-law was killed in the attack, the incident happened on Friday September 4,  in Maiduguri.

It was gathered that after the militants overan a military position, some soldiers jumped into their vehicle. Unknown to them, the terrorists had concealed bomb in the vehicle. The explosive-laden vehicle exploded, killing them all.

“Tears is flowing in my house right now as my wife’s favorite uncle just got killed in a car bomb in Maiduguri,” he wrote.

He is a soldier. He died in the line of duty. We heard Boko Haram attacked them, they rushed into a vehicle not knowing it was already laced with bombs…

Boom! He is gone. The technically defeated Boko Haram has swallowed another set of soldiers in their bottomless pit of violence.

Uncle (or what the bomb left of him) will be buried far away from family and friends, we will ask him to rest in peace and we will move on pretending that our country is not a massive graveyard.

For now, I’m focused on helping my wife not to lose her voice and health from wailing and sorrow… We will try to stay alive to do the only thing our country has given us to do: to lose hope, daily.

YOU MAY ALSO LIKE  SAD! 5 Persons Allegedly Killed As Benue And Cross River Communities Clash

Uncle, were you given enough bullets? Do you still have some? If you do, please shoot somebody from heaven. Forget about resting in peace for now; you can do that later.

Shoot. Shoot the all!