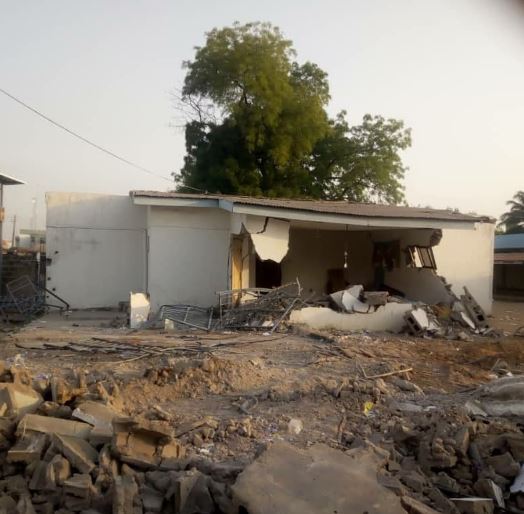 The Kwara State Government has in the early hours of today, Thursday begun the demolition of a property allegedly belonging to the family of former Senate President Bukola Saraki, a few weeks after serving them with a quit notice.

Recall that Governor AbdulRazaq-led administration had claimed that the property did not have a C of O, adding that no dime was paid to the state government before the land was “grabbed” by the Saraki’s father, late Olusola, during his administration as the Governor of the state.

YOU MAY ALSO LIKE  FREE EYE TEST! If You Can Spot The Difference In This Jonny Drille Picture, You Can Find Cure To Coronavirus

Earlier today around 4:00 am, it was learned, the security operatives dispersed protesters, including aged women within the complex while the demolition was going on.

The state government had fix midnight for the demolition exercise to avoid a clash with Saraki’s loyalists who had been keeping a vigil in the area.