Since the reemergence of the call for the ban of the Special Anti-Robbery Squad (SARS) of the Nigerian police unit, Burna Boy kept mute about the issue and this did not go well with millions of Nigerians. The singer was dragged left and right for always insulting the youths for failing to fight for their rights on the SARS issue and also for boycotting the protests.

Taking to his Instagram page a few minutes ago, he wrote that the police brutality has been an issue for too long as innocent people are being killed and profiled unjustly on a daily basis. He went on to call for the disbandment of the dreaded unit using the popular #ENDPOLICEBRUTALITY #endsarsnow hashtags. He wrote: “It’s been an issue, it’s still an issue. innocent people being killed and profiled unjustly by our own country people. #ENDYOUTHPROFILING #ENDPOLICEBRUTALITY #endsarsnow

In another statement, Burna wrote that he decided to keep mute because he usually responds to issues like this with his emotions and frustrations. He further wrote that he has set a charity organization called Projectprotectng to attend to those that have been wrongfully arrested/harassed by SARS and added that the platform would also be used to share and provide information that Nigerians need to know about their true origins.

YOU MAY ALSO LIKE  Why Dasuki, El-Zakzaky Can’t Be Released Now – Malami

Listing out the names of those that have been killed by the dreaded unit, Burna wrote that he would always use his music for the empowerment of Nigerians and Africans. This is coming after his girlfriend, Stefflon Don via her Twitter page announced that the singer was working behind the scenes to make sure there are changes.

It’s been an issue, it’s still an issue. innocent people being killed and profiled unjustly by our own country people. ??#ENDYOUTHPROFILING #ENDPOLICEBRUTALITY #endsarsnow

See the statement below: 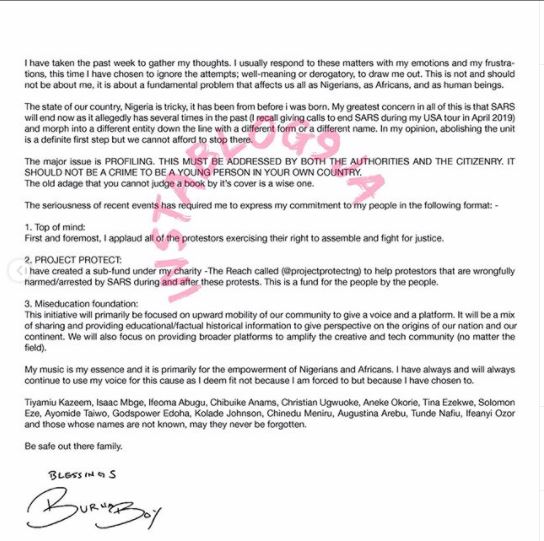