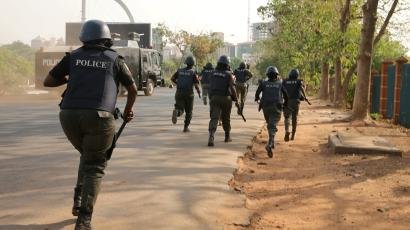 According to a report by The Nation, three gunmen attacked Royal Garden Relaxation Spot in Egume, Dekina Local Government of Kogi on Friday, killing one person and injuring many others, the police said on Saturday.

According to the state police command, the armed men shot sporadically into the premises of the relaxation spot at about 7:45 pm on Friday.

A statement by the command spokesman, DSP William Aya said that the attackers later fled the scene.

The statement did not disclose whether the armed men robbed their victims, but said the Divisional Police Officer in Dekina mobilized operatives to the scene immediately after learning about the incident.

YOU MAY ALSO LIKE  “I’m Not Shaken, I Always Win” – Melaye Reacts To Court Judgment

“He met one yet to be identified body lying in a pool of his blood and moved him to a nearby hospital where he was confirmed dead.

“The body was deposited at the hospital for autopsy,” the statement said.

According to the statement, the state Commissioner of Police, Mr. Ayuba Ekpeji has deployed a team of operatives to hunt for the hoodlums.

He assured that the police will arrest the attackers and prosecute them.

The commissioner advised members of the public to be observant and report suspicious movements or objects around them, as well as activities of criminal elements within their neighbourhoods, to security agencies.

YOU MAY ALSO LIKE  Elections: ‘Stay away from Yorubaland’ – OPC warns Asari Dokubo, Nnamdi Kanu, others

The post Commotion As Gunmen Invade Relaxation Spot In Kogi, Kill One, Injure Many appeared first on illuminaija.