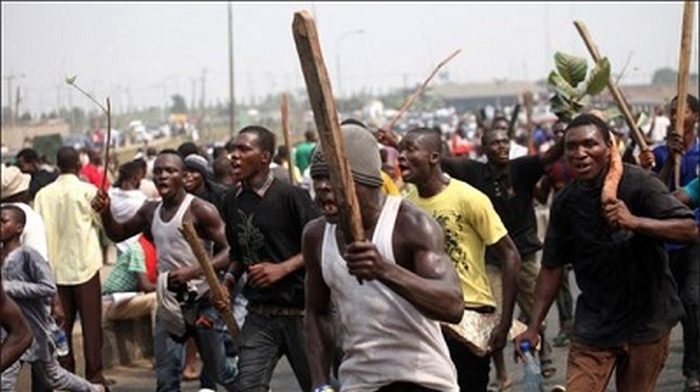 There is tension in Ijebu-Ode area of Ogun State as members of Eiye and Aiye confraternities are reportedly taking turns to retaliate the killings of their members.

Residents of Ijebu-Ode were said to running helter-skelter as the cultists continue to terrorise the ancient city.

We learnt that the superiority battle between the two groups started during last Tuesday’s Ojude-Oba Festival held at Olisa Road in Ijebu-Ode.

Hassan was allegedly killed with a “poisonous dagger” by his friend; who had been nursing a grudge against him for some time.

A resident of Ijebu-Ode, who pleaded anonymity told NAIJALOADED

“That night I was even fortunate to run for my life because, I was around that place when the crisis started.

“A guy belonging to Aiye, named Hassan was killed that night by an Eiye guy who happens to be his friend. Before they could rush the guy to hospital, he gave up.”

According to our source, members of the Aiye Confraternity retaliated Hassan’s death by killing two Eiye members before daybreak.

YOU MAY ALSO LIKE  LET’S PLAY!!! Back In School Days, Which Of Your Subject Teacher Was The Best Beater

It was gathered that the killings had been increasing at an alarming rate as it has now become a source of worry to members of the public, who have been blaming the police for not doing enough to nip same in the bud.

On Tuesday, indigenes of Ijebu-Ode were sending messages to their loved ones through the social media to steer clear of some areas in the metropolis for fear of being killed or injured by the cultists rampaging the areas.

A copy of the message seen by our correspondent reads:

Our source added that,

“The cultists are still killing each other. As at August 19, two Aiye and one Eiye members were killed. But none have been reported dead today. One Aiye guy killed at Oloode road in Ijebu-Ode was ‘packed up’ by the police. But the police have not been doing anything.”

Contacted, the Ogun State Police Public Relations Officer, Abimbola Oyeyemi, said he would reach out to the Ijebu-Ode Area Commander for details and revert back to our correspondent.

However, he was yet to do so as of the time of filing this report.