The post sighted suggests that he has pulled out of the Asaase Radio Sound Clash scheduled for 12th September 2020.

Taking to Facebook, the Dancehall king registered his displeasure over the turn of events in the voting process ahead of his lyrical clash with Stonebwoy.

As instituted by the organizers of the clash, a portal through which fans of both musicians are expected to vote for their favourite to win has been opened.

He suspects some foul play in the votes hence his plan of backing out.

As of yesterday 9th September 2020, Shatta Wale was leading Stonebwoy with a lot of points.

But all of a sudden, we woke up this morning only to see Stonebwoy leading Shatta with massive thousands of votes. How come?

As a result of this, Shatta Wale is not ready to proceed with the approaching clash with his music rival Stonebwoy.

YOU MAY ALSO LIKE  LYRIC VIDEO: DJ Coublon "My Way" ft. Iyanya

According to his post as sighted on Facebook, Shatta Wale stated tauntingly that the Asaase Radio Sound Clash is like the VGMA’s, the board always wants their favourite to win.

In this case, he was making reference to Stonebwoy being the favourite the organizers of the clash wants to win.

His post yet was accompanied with laughing emoji, could he be that serious of backing out? or he’s trying to cause traffic for the much-anticipated clash in history, The Asaase Radio Soundclash.

He wrote; “Another Vgma strategy for a clash ????? Trying so hard to make their favorite win ??? Infact I am not even doing this anymore for your info ? Nonsense !!!

If nothing comes up, and Shatta Wale’s post on Facebook is nothing to go by, then the long-awaited clash between two of Ghana’s biggest Dancehall musicians comes off this Saturday 12th September 2020. 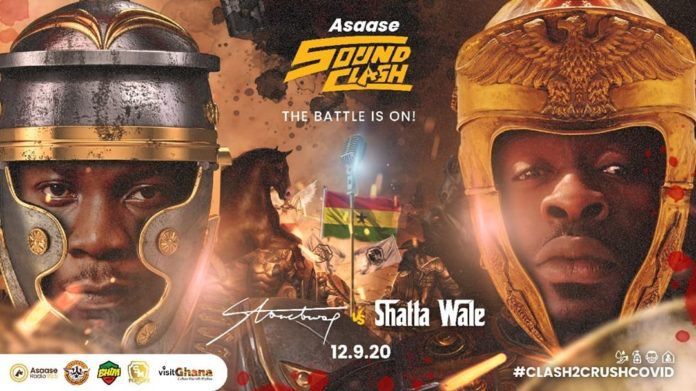 Who takes home the enviable prize and the bragging rights?

The post Could Shatta Wale be backing out of the Asaase Radio sound clash ? check his new post out appeared first on illuminaija.