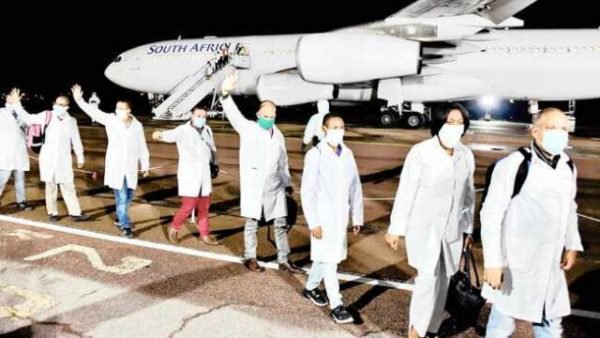 KwaZulu-Natal authorities said that Cuban doctors won’t move out of the province despite the decline in COVID-19 infections.

According to Premier Sihle Zikalala, he said about 6% patients of the 120,000 COVID-19  cases were still living.

Health MEC Nomagugu Simelane-Zulu said they still need the services of the Cuban doctors in the province.

Earlier this year, 217 Cuban doctors were sent over to the country to help in battling against COVID-19. 28 of these Cuban doctors  are currently working in KwaZulu-Natal.

“A few of them were epidemiologists. Now, as a province, we are running out of those. We don’t have enough, so we are quite happy to have them because we will be able to utilize them.”

YOU MAY ALSO LIKE  Busted! How Police Officers Sent To Fight Kidnapping Were Caught Receiving Bribes

Simelane-Zulu said they are trying to stop investing from quarantine sites in order to save costs but this has come with its challenges.

“We had gone out to get BnBs, hotels, and so forth to utilize. Now that our numbers have gone down, we are getting out of the contracts that we had with the different facilities. I must, however, indicate that it’s not the easiest thing to do because we’ve got a legal document that is binding.”

However, provincial authorities are thankful to residents for keeping to COVID-19  regulations, and said it had contributed to the decline in community transmissions.