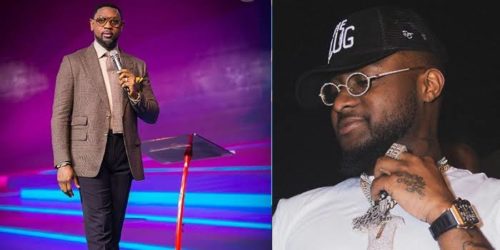 Davido has sent a warning to Pastor Fatoyinbo’s church, COZA, telling them to take down a doctored advert in which he is featured on.

All hell was let loose on social media last night when a supposed advert by COZA featuring Davido found its way on the internet. This supposed advert caused a lot of uproar, making fans condemn Davido for associating with a church that its pastor had a serious rape case with the wife of a music colleague. This uproar has now led Davido to quickly releasing a statement via his social media pages telling everyone he never made an advert for COZA. He said he was only doing his duty as a celebrity, accomodating fans which led to him speaking with a little girl that was introduced as a fan by a possible member of the church. He said he is now surprised that the little time with the girl has led COZA into putting it out as an advert.

Biko who advised Davido to record this promotional video for COZA 12 days of Glory? Totally disappointed. You people should do better. Biodun Fatoyinbo we see your PR work with Davido, but the world knows who you’re. pic.twitter.com/fJa1Yvg4qJ

To whom it may concern pic.twitter.com/OMBlWNuWEo

The post Davido Declares Possible War On Pastor Fatoyinbo & COZA After Being ‘Scammed’ By The Church appeared first on tooXclusive.