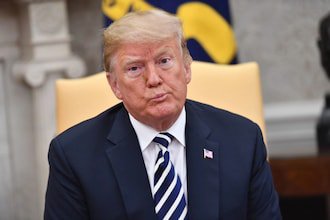 President Donald Trump has been impeached by the House of Representatives of the United States of America.

The members of the US House of Representatives voted 230 in favour of removing Trump against 197 for him not to be impeached on the first article of impeachment – abuse of power.

On the second article, which is obstruction of congress, the federal lawmakers voted 229 to 198 for Trump to be impeached.

Donald Trump may be impeached within the next few hours
With this, Trump becomes the third president to be impeached in the history of the United States.

The president was accused of using his public office to coerce a foreign government into attacking his political rival.

Donald Trump was impeached as president by U.S House of Representatives for abusing his powers and obstructing Congress.
Trump was accused of pressuring Ukraine to open an investigation into the president’s political rival and former vice president, Joe Biden.

The president was also accused of obstructing congress’s investigation into his conduct.

Although he has been impeached by the House of Representatives, Trump still remains in office until his impeachment is approved by the upper house of the American legislature, the Senate. 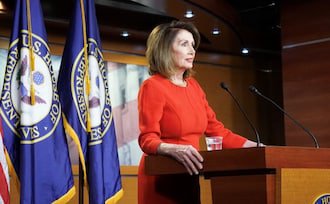 The charged against Trump was spearheaded by the Democratic-led House of Representatives under Speaker Nancy Pelosi.

Speaking on the impeachment, Pelosi said Trump gave Democrats no choice but to pursue impeachment.

She described Trump as an ongoing threat to America’s national security and the integrity of the U.S elections.

Speaker Nancy Pelosi led the impeachment proceedings that led to the ouster of Donald Trump as president.
Meanwhile, the president is not expected to be removed from office immediately as he now has to face trial at the Senate.

A two-thirds majority at the Senate is required to convict and oust him.This means 67 out of 100 senators.

The Republicans control the 100-seat chamber with a 53-47 majority. So, the president is widely expected to be acquitted.

Trump was charged by the Democratic-led House of Representatives for obstruction of Congress and abuse of power related to his dealings with Ukraine.

The post Donald Trump impeached as president by U.S House of Representatives appeared first on .