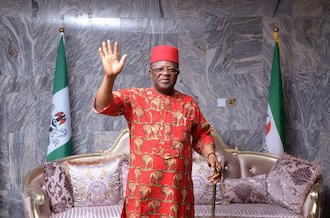 Chika Nwoba, spokesperson of the All Progressives Congress (APC) in Ebonyi, has resigned from his position moments after Governor Dave Umahi formally announced his defection to the party.

Recall that Umahi defected from the Peoples Democratic Party (PDP) to the ruling party after months of speculations ridden by anxiety.

The governor’s defection to APC on Tuesday, November 17, was officially recognised by the ruling party household.

But in a prompt response to the development, Nwoba who is an APC chieftain in Ebonyi, said he is leaving his position because he cannot continue to work at the forefront with Umahi being the supreme leader of the party in the state after his defection.

YOU MAY ALSO LIKE  Buhari, APC Have Shown South-east Is Not Part Of Nigeria, Says CSEY

Nwoba in a statement on Monday expressed gratitude to the APC and its leaders for finding him worthy to be elected to the position in 2018, at the age of 27, The Punch reports.

“I cannot work with Ebonyi State Governor, David Umahi,” the APC chieftain said while breaking the silence on why he quit being the APC Ebonyi state publicity secretary.