Award winning rapper Edem has revealed that a popular presidential candidate has refused to answer his calls for the past four years now.

According to the VRMG boss, all calls he has placed to all his policitians are all not been answered because the elections are over and they no more require his services.

Sharing a photo on his social media handle, he captioned it: “Election is over..My Politician friends no Dey pick my call ..Hmmm” 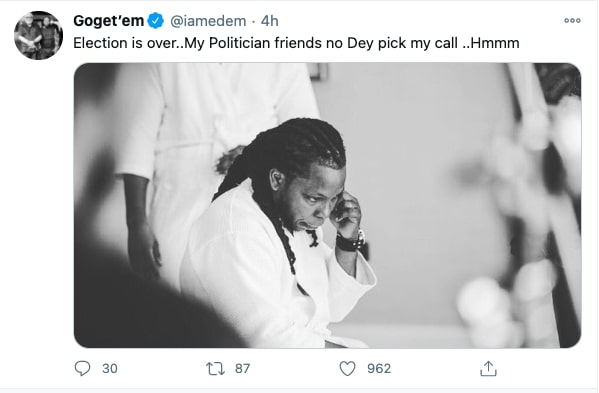 The rapper came back some few minutes later and informed his fans that he would one day come out and tell them a short story on how this politician he is referring sort for his services four years ago.

He went on to disclose that after fulfiling his part of the deal which was to perform at his campaign, the politician has failed to pay the rest of the money he owes him because he lost the elections.

He posted: “I would tell you guys a story about :How four years ago I played a show for an independent and after he loss e no want pay the rest..E go hide for Spintex some place but his girl be was my friend and she showed me the house..Total comedy plus action when I got there ????” 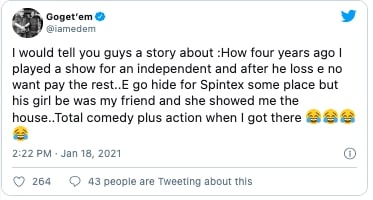 The post Edem exposes a popular politician who owes him for the past four years appeared first on illuminaija.