The ongoing civilian brutalities have caused a massive divide among some Ghanaian celebrities on Twitter.

It all started when Ghanaians began to call on the Chairman of ECOWAS, Nana Addo Dankwah Akufo Addo who is also the president of Ghana to address the ongoing #EndSARS brutalities.

Whiles many people including Yvonne Nelson, Lydia Forson A-Plus and many others were shocked with the loud silence of Nana Addo, others were hitting back and defending the Ghanaian president.

Medikal who couldn’t sit idle and watch Yvonne Nelson drag the president’s name took time to school her on the issues of diplomacy.

Medikal again told Yvonne Nelson and other critics not to blame the incompetence of Buhari on president Akufo Addo. 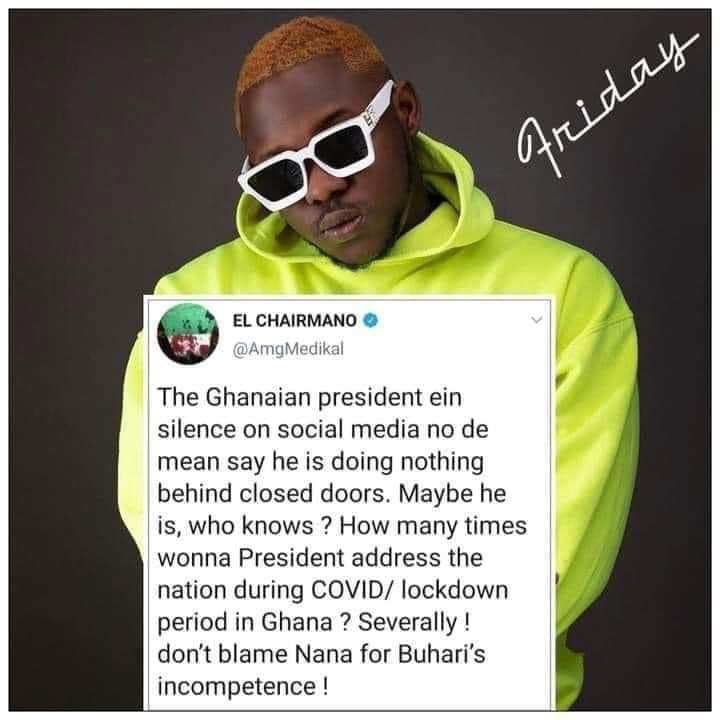 Upset Manifest who could not sit idle and watch the hypocrisy being displayed by Medikal and others decided to jump into the fray.

Manifest warned supporters of Nana Addo to move a side And let those who want care about him right abuse to do so.

By the way, Nana Addo has finally reacted to the Nigerian brutalities. He has advised the protestors and government to go back to the table and settle the issue amicaly.

Nana Addo also revealed he has spoken to Buhari and he has assured him he is doing all his can to put the chaos and unrest in the country to peaceful rest.

YOU MAY ALSO LIKE  VIDEO: D’Prince – Sade | WATCH IT

The post EndSARS: Allow those who care to speak- Manifest blasts Medikal for attacking Yvonne Nelson appeared first on illuminaija.