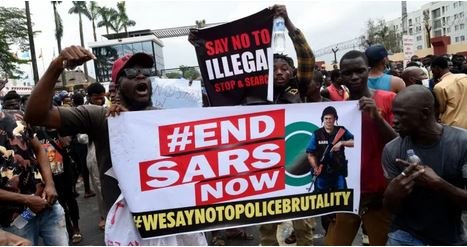 Adamant Nigerians have vowed to continue the #EndSARS protests until President Muhammadu Buhari adsresses the country.

Few hours after the Inspector General of Police in a live broadcast on Sunday announced that the Special Anti-Robbery Squad unit of the Nigeria Police Force under the Force Criminal Investigation and Intelligence Department had been abolished “with immediate effect”, quite a number of Nigerians have taken to Twitter to express their doubts about the disbandment of the police unit.

The users who seemed not to be satisfied owing to similar promises of reforming the police department in the past which failed insisted that the protest will continue until President Muhammadu Buhari addresses the nation.

YOU MAY ALSO LIKE  Nigerian Man Sentenced To Prison For $8.3M Medicare Fraud (Picture)

The dissolution of SARS came on the back of the #EndSARS protests across the country and some parts of the world.

Announcing the dissolution on Sunday, Frank Mba, police spokesperson, on behalf of the IGP said  a new policing arrangement to address anticipated policing gaps the dissolution of SARS would cause has been evolved and shall be announced in due course,”

Not being pleased with this, some Nigerians took to social media platforms calling for the president to address the nation as well as sign an executive order.

YOU MAY ALSO LIKE  SARS: ‘Naira Marley Is A Coward’ – Deji Adeyanju Attacks Musician

The post #EndSARS: Protest Continues Until Buhari Addresses The Nation, Nigerians React To Disbandment Of SARS appeared first on illuminaija.