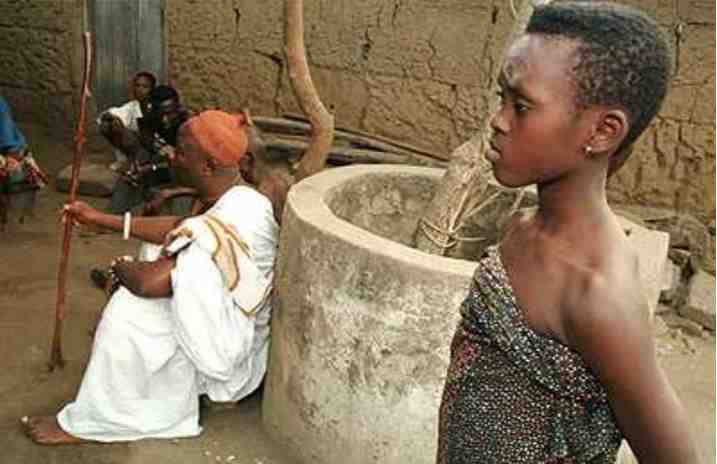 Ever heard of this heartbreaking story? In certain communities in West Africa, underage girls are handed to shrines as atonement for crimes committed by their parents or a family member, a BBC documentary has revealed.

In the shrines, the girls who are treated as captives, are forced to do all kinds of chores and are s3xually abused by priests serving in the shrines, once they are past puberty.

Trokosi is practised till this day in certain communities in Benin, Togo and Ghana even though it was declared illegal in Ghana in 1998.

It is a system where adolescent girls are herded to shrines to become slaves.

It is believed that if they don’t serve in those shrines as Trokosis, their family members will be afflicted with strange ailments and eventually die.

How girls are donated to shrines as s3x slaves play Perenyi serves as a shrine in Ghana.

Brigitte Sossou Perenyi was a Trokosi. She was 7 years of age when her dad was deceived into handing her over to an uncle in Lome, Togo.

From Togo, Perenyi ended up in a shrine until one day in 1997 when help came her way. 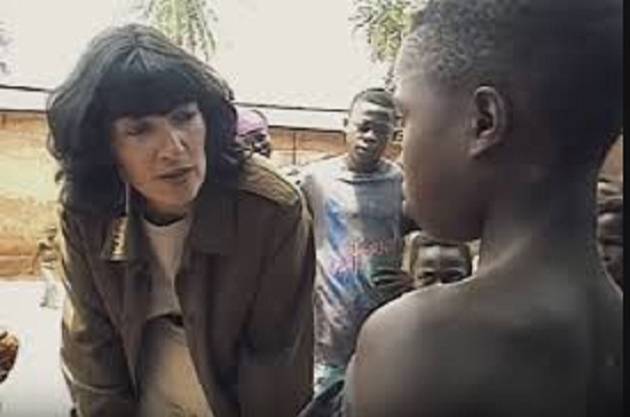 “When I was 7, I was brought to Ghana and forced into a system I knew nothing about”, Perenyi narrates. “I was held as a slave in a religious shrine”.

One day in 1997, an American news crew led by Christiane Amanpour, checked into this village in Ghana for the Trokosi story.

How girls are donated to shrines as s3x slaves play A CBS crew led by Amanpour worked on the Trokosi story in 1997.

“What crime is this child paying for?”, Amanpour asks, as the then 7-year-old Perenyi and other Trokosis looked on, crestfallen and

shattered well aware that their futures were no longer in their own hands, at least for the moment.

“Do you know why you are here?” Amanpour asks a starry-eyed Perenyi who shook her head to say she doesn’t. Perenyi had a basin

perched on her head and she was wrapped in a black wrapper. She was surrounded by other child slaves in the sultry African

As a slave in a shrine, Perenyi says she was isolated and not allowed to go to school. 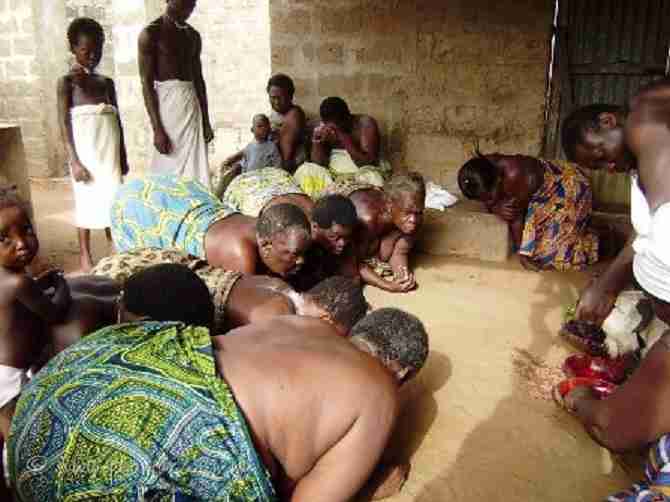 Help from the international media

“In 1997, I was filmed by an American news crew at the place I was being held a shrine run by a priest dedicated to the worship of deities. I

was labelled a Trokosi a wife of the gods paying for a crime committed by a family member”, Perenyi says in an emotion-laden voice.

The CBS report of 1997 changed everything for the young Perenyi.

“The report changed everything. With the help of a charity called International Needs, an American viewer flew to Ghana to negotiate my

release. His name was Kenneth Perenyi and he would become my adopted father.

How girls are donated to shrines as s3x slaves play Kenneth Perenyi flew to Africa from the U.S to save a little girl from Trokosi.

“He took me to the US where I spent the next 13 years. I was released to be out after a year in the shrine, but there was a huge emptiness that could never be filled”, Perenyi says.

That emptiness set her on the road to find her parents and unravel the story behind the Trokosi system.

her back. Over earthenware pots in a typical African village dotted with farmlands, charcoal fires and domestic fowls, the tears flowed after

Perenyi alighted from her Jeep into the home from where she was plucked into a life of slavery in Ghana. 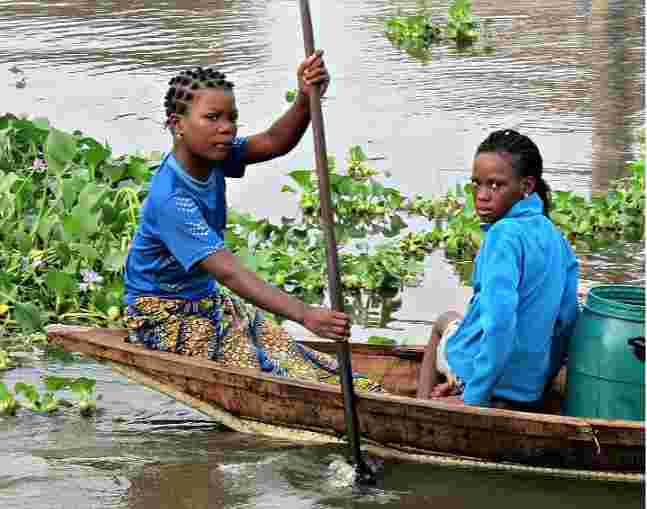 Reverend Walter and Dr Robert Ame who have been raising awareness on the Trokosi system, told Perenyi that the slave tradition persists

“For the practice to be consummated, there was a need for the traditional priest to sleep with the virgin girl who comes in”, Walter narrates.

“S3xual servitude was common and many women would bear the children of the priests. I was liberated before puberty, so I didn’t have to

go through this. But I wanted to know why someone would serve time for another person’s crime”.

How girls are donated to shrines as s3x slaves play Perenyi returns home after 20 years and she can’t stop the tears.

According to Ame, “it is believed that they have a right to select any member of their family to serve in their shrine, whether that person committed a crime or not. By their collective principles, they believe they are doing the right thing”. 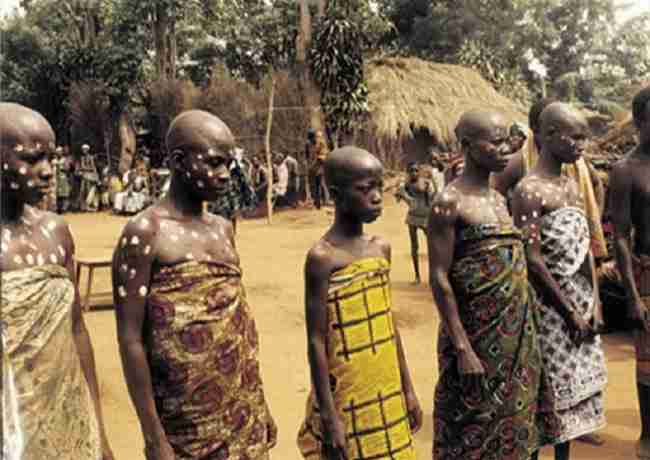 Tricked to hand over his daughter

Perenyi’s biological dad says he was tricked into sending his daughter to Lome.

“All I knew was that one of my uncles had sent for me, but I had never known what my father had agreed to”, Perenyi said as she returned to her home for answers.

YOU MAY ALSO LIKE  REVEALED: Why Roman Soldiers Were Scared Of Britain

How girls are donated to shrines as s3x slaves play Perenyi returns to her village in Togo. Here, she smiles at her younger sister’s child.

“Your uncle said he needed you to come and run chores in his house”, Perenyi’s dad explained, a mist forming in a corner of his eye.

“I went to Lome to look for you, your uncle told me you weren’t there. I roamed the streets endlessly and didn’t find you. I came home so

How girls are donated to shrines as s3x slaves play Perenyi’s dad says he didn’t know he was sending his daughter to slavery.

To find answers, Perenyi’s father consulted a soothsayer. “He told me you were alive but he couldn’t tell me where you were. I don’t want to

blame anybody. It is neither mine nor your mother’s fault. Continuing this conversation will only bring conflict”, her dad says.

“Whatever has happened, has happened. I am just happy that you are back home. But if you want to blame somebody, blame me”, he adds.

Trokosi is still a thing

Perenyi was also able to discover that the Ewe people of Ghana still practice the Trokosi. Perenyi’s Uber driver, Richard, has a grandmother who still serves in a shrine as a Trokosi.

How girls are donated to shrines as s3x slaves play Perenyi consoles her friend who was also a Trokosi with her.

When Perenyi and Richard met up with this grandmother who became a Trokosi after she married and had children, she said she was

happy that she was sent away in exchange for lives free of sicknesses back home.

“If a man sleeps with a Trokosi woman, he must sacrifice a girl to the shrine. If he doesn’t do that, his family members will fall sick and die

for generations to come. If I passed away right now, they’d have to bring a girl to replace me. And even if that girl passed away, they would

have to replace her too.

How girls are donated to shrines as s3x slaves play Richard’s grandmother is still a Trokosi.

“If I hadn’t been brought here, I would have gone mad. I am fine”, Richard’s grandmother said in between chuckles.

The post Ever Heard About The Practice Of Donation Underage Girls To Shrines As S£x Slaves In Africa? See Here appeared first on illuminaija.