‘Angry’ Nana Aba has fired some shots at Lydia Forson on Twitter. She called her out to blast her following the latter’s message about betrayal and mistrust onTwitter.

Lydia Forson, in one of her open tweets, advised that people should treat others with respect and try to stop entertaining people they don’t like because they think you may need them.

YOU MAY ALSO LIKE  “God didn’t give it to me to cover it” -Actress, Moyo Lawal flaunts petite backside

She wrote;  That “you never know when you’ll need someone”, will have you keeping the most unnecessary people in your life for years. The day you will actually need them they may not even come through for you. Stop entertaining people you don’t like because you think you may need them.

Nana Aba who thought the post was meant for her reacted uninvited tweeting at her in an angry manner.

According to Nana Aba Anamoah, Lydia Forson was referring to her in her message on social media above but did not dare to mention her name hence calling her to ‘man-up’ and speak boldly.

In her reply to Lydia Forson’s tweet, she wrote: ”Is this about Us? Are you referring to me? Be bold, madam, Face me like a woman” 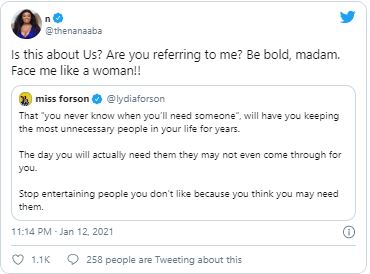 The post Face me if you dare – Nana Aba Anamoah angrily says to Lydia Forson appeared first on illuminaija.