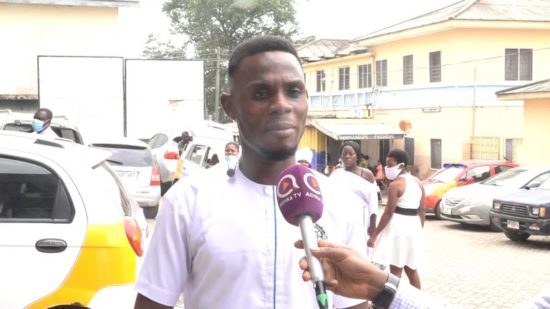 A 20-year old man, Samuel Nii Quaye who got missing at age 2 has finally reunited with his family, after he (Samuel) appeared on Atinka FM’s “Obi Adi Mawu programme” to recount his ordeal.

The 20-year old man who had been living with a fetish priest all his life said he got to know the man was not his biological father when his wife died.

Samuel Nii Quaye disclosed that prior to the burial of the wife of the fetish priest, his name was omitted from the section of the obituary which had the names of the children of the deceased.

According to Samuel, he inquired from children of the fetish priest, who he thought were his biological siblings, why his name had been deleted from the obituary only to be told that he was sold to the fetish priest over 18 years ago.

After the revelation, Samuel embarked on a journey to look for his biological parents, a search which brought him to Atinka Media Village and subsequently shared his story on Atinka FM’s “Obi Adi Mawu”, show.

Samuel narrated his ordeal on the programme and before the programme ended, more than four families had come to report that they had lost their son some 18 years ago.

Of all the families that came, it was only the Nii Quaye family who returned after they were asked to go for a DNA to confirm the paternity of the child.

“Immediately I saw the boy I knew that he was my son. He had a birth mark at his back which was confirmed by Atinka FM’s Pastor Martin and his team and so I was not surprised the DNA test confirmed it”, father of the boy, Mr. Emmanuel Nii Quaye said amidst tears.

Mother of the child, Alberta Yartey, who could not hold back her tears said the return of her son is a confirmation that there is a supreme being called God.

Grandmother of the child, Diana Collison, who was accused of being a witch after her grandson got missing, told atinkaonline.com that she has been vindicated.

Also speaking to Atinkaonline, the host for the Program, Pastor Martin Semordzi, who formally reunited Samuel Nii Quaye with his family expressed gratitude to God and asked the father of the boy to take care of him since he had really suffered.

“Obi Adi Mawu”, a program, which brings to light the bad deeds of so-called men of God airs on Atinka FM from Monday to Friday from 10am to 12pm.

The Program is repeated on Atinka TV from Monday to Friday from 9pm to 10pm.

The post Family Jubilates As Son Who Went Missing At Age 2 Finally Gets Found At 20 appeared first on .