Rumours springing up on social media has it that Medikal is expecting a second child with another woman outside his marriage to Fella Makafui.

The La Hustle hit song crooner allegedly is about to have a baby after his first child, Island, with Fella was born in September.

A blogger by name Cutie_Julls reported that this new child was going to be Fella’ very first step child suggesting Medikal was seeing some other woman aside his wife. 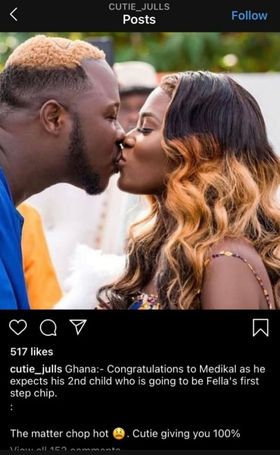 Knowing that Medikal and Fella’s relationship has always been surrounded by controversy, it is expected that at some point, the couple could pull another trick out of their bag and get people talking again.

YOU MAY ALSO LIKE  Gunmen Abduct Ondo University Lecturer In Edo

Nonetheless, Fella Makafui has taken to Twitter to respond to the rumours. She found these allegations shocking and funny at the same time.

Her tweet read, “Eiiii lol.” She laughed off the rumours and gave no room for cybernauts to feed off unfounded allegations.

However, only time would prove if there is any truth to these rumours.

The post Fella Makafui reacts to cheating scandal of her husband, Medikal appeared first on illuminaija.