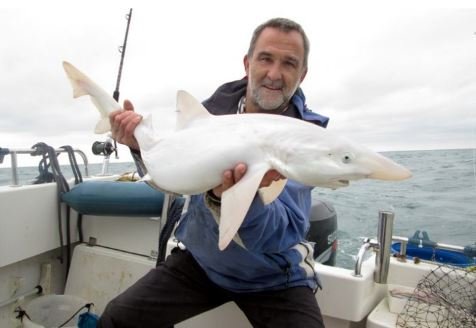 A man has been left stunned after catching a rare all-white Albino shark off the coast of the Isle of Wight.

The man who caught the fish, identified as Jason Gillespie, 50, was delighted to discover he had hooked one of the first ever albino all-white sharks caught off the coast of Britain.

He was deep-sea fishing with some friends when he caught the tope shark.

The shark, which measured around 3ft, is leucistic, a relatively rare condition which means it has lost all the pigment in its skin.

Jason, from Hampshire, would usually have immediately released a tope shark – but reeled this one on board so he could take a few snaps, before letting it go, reports Leicestershire Live.

The shop fitter said: “I’ve been fishing for 30 years and I’ve never seen one like that. Apparently it’s a condition where the pigment dies out of the skin colour.

“It’s similar to an albino, but they have red eyes generally.

YOU MAY ALSO LIKE  Simon, Chukwueze The Stars In Nantes And Villarreal Wins

“I caught it on Tuesday, off the Isle of Wight – what’re the chances? I have no idea. It’s the fish of a lifetime, one in a million.

I’ve certainly never seen one, it’s been on Facebook since Tuesday and no one else has come forward and said they have caught one.

“I heard of one person from Wales who caught one years ago but it was much smaller, about 6lb.

“I think generally if they lose their colour they struggle to survive because they don’t have the same camouflage and they can’t hunt as effectively and they get picked up by predators.

“With tope, they are a protected species, so we unhook them in the water, but the minute we saw this one I shouted to my mate to grab the net and knew I needed to get some photos of it so we pulled her on board and took some pictures.

YOU MAY ALSO LIKE  AFCON 2019: ‘They Slaughter Our People In South Africa, We Tore Off Their Pants In Cairo’ – Fani-Kayode Mocks Bafana Bafana

“We released her as quick as possible, she was only on the boat for less than a minute.”

The tope shark feed on a variety of fish species, crustaceans or cephalopods, and can travel huge distances.

They are often found in the UK and can travel from Britain all the way to the Canary Islands. 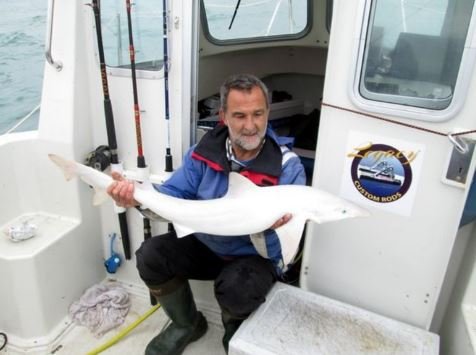 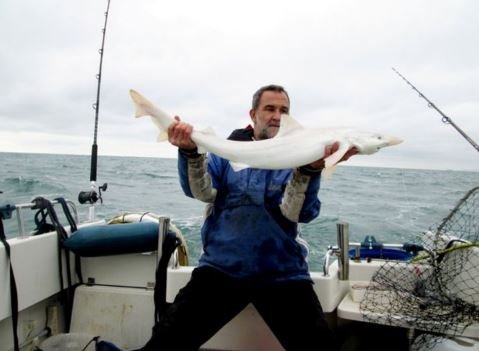 Watch: Sho Madjozi and friends join the “which do you prefer” trend on TikTok