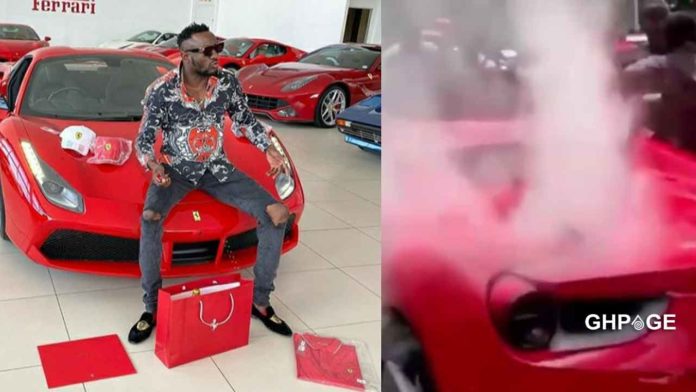 The death of the Zimbabwean socialite and millionaire Ginimbi took the world by shock. It was reported that he died in a fatal car crash together with 3 of his friends when they were returning from a birthday party.

The car they were driving had a head-on crashed with another car and eventually caught fire, burning to ashes. The aftermath of his death comes a series of shocking revelations.

One that dominated headlines was the report that Ginimbi bought a coffin and placed it in one of his spare rooms in his mansion a week before his sad passing.

In a new report coming from Zimbabwe, one of the luxurious cars owned by the late millionaire caught fire enroute to his memorial service.

YOU MAY ALSO LIKE  American Rapper; Meek Mill, Shares Beautiful Family Picture Of His Grandma & Brothers

According to the new report, his ferrari was being driven by his best friend who has been identified as DJ Rimo, en-route to Doves Funeral Services Parlour where Ginimbi’s memorial service was been held.

It is said that when the car got to Herbert Chitepo Street and 2nd Avenue in Harare CBD at noon, it got overheated forcing the driver to abandon the car in the middle of the road.

Few minutes after he had left the car, smoke started coming out of the car which saw people gathering around it.

Some netizens after seeing the video have started asking questions about the millionaires source of wealth with all the things happening to him.

It is even rumoured that he even planned how his funeral should be done before dying.

The post Ginimbi’s Ferrari mysteriously catches fire after his friend drove it to his farewell party appeared first on illuminaija.