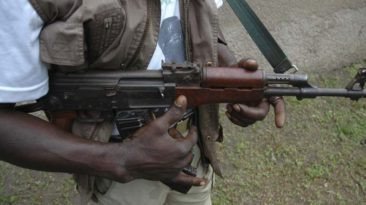 A Director in the Ekiti State Local Government Service Commission, Mr David Jejelowo was on Monday September 14, shot dead by some unknown gunmen.

The deceased was reportedly shot dead at his residence located at Umesi street, Igirigiri Area of Ado-Ekiti metropolis.

Ekiti police spokesperson, Mr. Sunday Abutu said Jejelowo suffered the attack around 1:00 am on Monday. Though the police have not been able to ascertain the intention of the assailants, it was gathered that the corpse has been evacuated to the morgue of the Ekiti State University Teaching Hospital, Ado Ekiti.

“I can confirm to you that the man named David Jejelowo was killed at his residence at Umesi street, Odo Ado area of Ado Ekiti early this morning (Monday) by assailants.

“He was killed in his room by assailants whose intention we have not been able to establish as of now.

“We are investigating and I believe our investigation will reveal whether it was a case of assassination or robbery.

“We are assuring the public that the perpetrators shall be arrested and punished for their sins.”