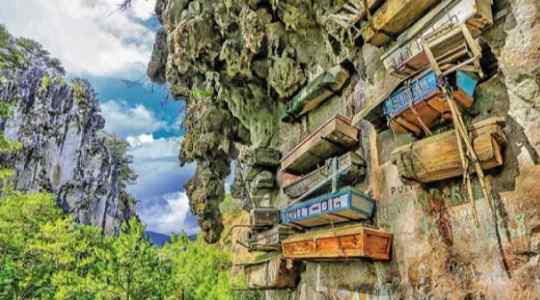 From drinking the ashes of the dead, keeping the dead in the home for years to amputating women as a form of mourning,  some of the funerals rites from around the world un-understandable.

In most world, funeral involves digging a grave and burying the dead, cremation and that’s the end of it. Families can visit the graves of their loved ones adorning their graves with flowers. 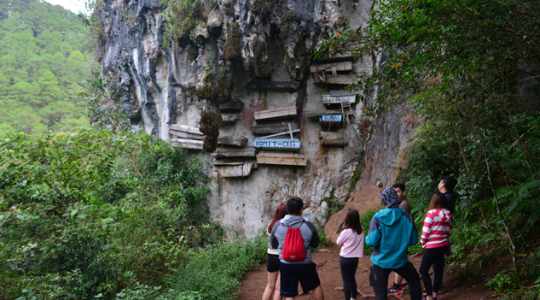 In other worlds, funerals are way more than just burying the dead. Funerals in these parts of the world involve rituals that seem unusual and frightening at times.

One of these practices is the mystical tradition of the “hanging coffins,” or what is considered to be the remnants of an ancient funeral ritual emblematic for locations across Eastern and Southeastern Asia, like parts of China, the Philippines, and Indonesia.

The coffins were normally made from hollowed-out trunks of trees and placed into man-made caves on the faces of steep hills, or onto horizontal wooden beams that were built on mountainsides.

Many of them have withstood the test of time and can still be seen in the remote mountains of Eastern Asia, such is the case in the county of Gongxian, Sichuan Province, southern China, where a great number of hanging coffins are located.

Reportedly, these particular hanging coffins were left behind by the Bo people, a Chinese ethnic group considered to have been lost since the early 1660s when they were massacred by the army of the Ming Dynasty.

According to Mail Online, the strange funerary practice in this region ended with the disappearance of the Bo people.

More than 40 hanging coffins were found in the mountains of Gongxian. The oldest ones date back three millennia, while more recent ones date from the 1500s.

They are considered a valuable cultural heritage, and archaeologists from all over the world are trying to protect and restore them. Several coffins have been lost, however, as some fell from altitudes as high as 420 feet.

Not all aspects are understood of this peculiar funeral practice. Some historians believe that the Bo people wanted their dead to rest closer to the gods, and they believed that gods would easily reach them if they were suspended in mid-air. 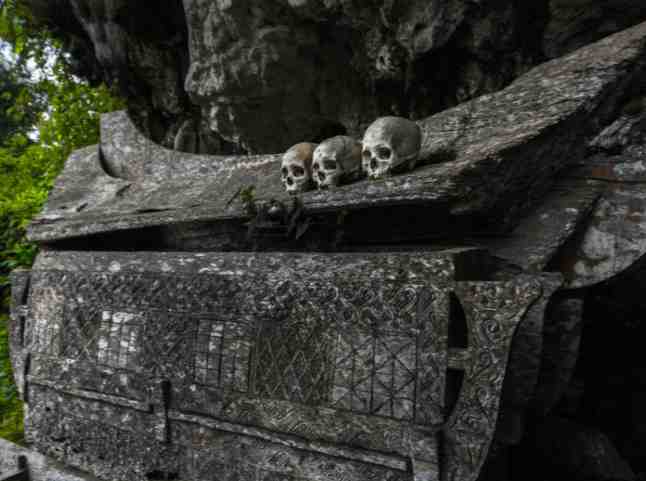 Local legends supposedly also say that the souls of the people buried in the hanging coffins will remain blessed for all eternity.

Aside from the Gongxian Mountains, another famed Chinese location is Quibei County in the province of Yunnan, where more hanging coffins have been located.

Here the funerary practice is better known as “hanging tombs” and the departed are placed into small man-made caves. 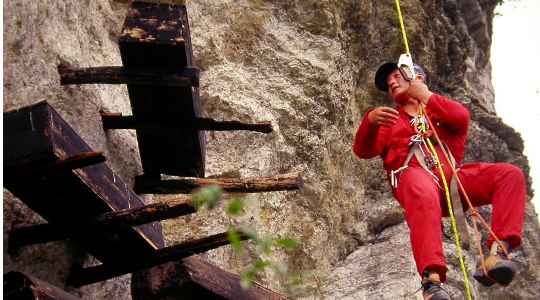 Some more knowledge about the hanging coffins has been collected from Sagada in the Mountain Province of the Philippines, where, in the past, hanging coffins was practiced on a large scale as a way of burial.

YOU MAY ALSO LIKE  It Was A Calculated Attempt By Nigerians To Disgrace Ghanaian Celebrities – Ghanaian OAP, Queen Afia Accuses Nigerians Over Failed Meet-&-Greet With Cardi B

As the Rough Guide reports, elders in Sagada count among the very last practitioners of this rare and ancient funeral practice, though the practice is observed on a small scale today.

A team member of the Rough Guide interviewed a retired local schoolteacher, named Soledad Belingom of the Igorot Tribe, in 2014.

According to Soledad, the practice of burying the departed this way is indeed associated with ancestral spirits, and in the case of the Igorot tribe, it means allowing the dead bodies to move to higher realms and be closer to the spirits.

As the tribe elder explained in the interview, there are a few other reasons why this funerary practice has been observed and one of them is supposedly fear.

Fear that the corpses would rot too soon in the soil, or be consumed by an animal. Therefore, leaving the coffin to hang was considered a much safer option of how to treat the dead. 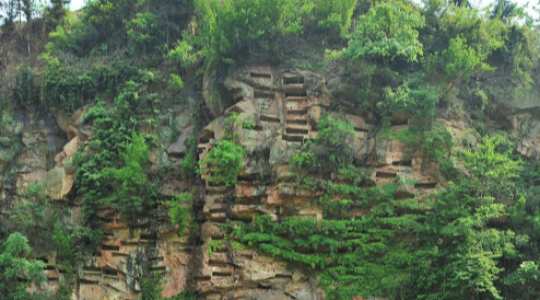 In the distant past, laying the dearly departed to rest this way also meant keeping them safe from enemies who could have potentially looked for the bodies to take home as a sort of trophy.

Arranging for the coffins to hang would have given assurance to tribe members that their dead were safe and unreachable.

The post HANGING COFFINS| See Countries That Hang Their Dead On Walls Instead Of Burying Them appeared first on illuminaija.