An angry Prince David Osei has taken to social media to question critics who have slammed him for campaigning for Nana Akufo-Addo and Lydia Alhassan against John Dumelo who happens to be a colleague.

In a post sighted, the multiple-award-winning actor in rage lambasted his detractors describing them as people with small brains and ‘hypocrites saying nonsense’.

The conversation has been on for days following a video and photo that surfaced online that sees Prince David Osei, Kalybos and other movie stars at Ayawaso West Wuogon massively campaigning for Lydia Alhassan who’s contesting John Dumelo.

The move has shocked a lot of Ghanaians as they thought as creative arts people, they should have endorsed John Demelo who could advance their interest once he gets to parliament.

Responding to the backlash, Prince wrote; “Small Brain Hypocrites Saying Nonsense, Even John Understands .. We Move #1, How Can I Support NPP And NDC Same Time?? Why Is Ayawaso Not Where I Stay? And Is The President Not Contesting There As Well? Bunch Of Hypocrites” 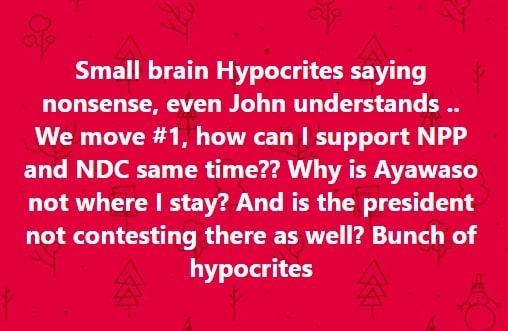 The post How can I support NPP and NDC same time?? – Prince David Osei questions trolls over his decisions appeared first on illuminaija.