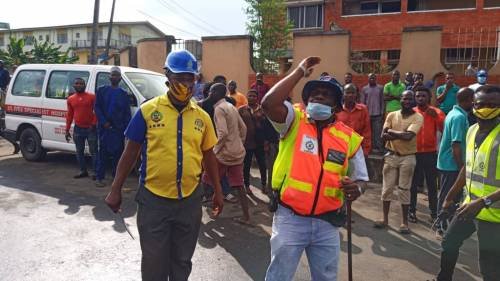 According to SaharaReporters, a resident of Opebi Street in Lagos, who witnessed a helicopter accident in the area on Friday, has decried the lack of empathy by some Lagosians towards accident victims.

The helicopter, a Bell 206, with registration number 5N BQW, belongs to Quorum Aviation, an air transportation and logistics company.

It was coming from Port Harcourt, Rivers State, with two crew members and a passenger, when the accident occured.

The man, who identified himself as John, told SaharaReporters that first responders, who rushed to the scene stole victims’ mobile phones and cash.

He also said he lost his phone while trying to rescue them.

YOU MAY ALSO LIKE  Nigerian Stock Exchange suspends 6 firms

He said, “It’s so bad we could do this to ourselves, some people rushed here pretending as if they were helping us to bring out the bodies of those involved in the accident only for them to steal their phones and money. Even my phone was taken away, I gave it to someone while trying to rescue them but the person ran away with it.”

John added that the helicopter hovered several times around the area before crashing into the building.