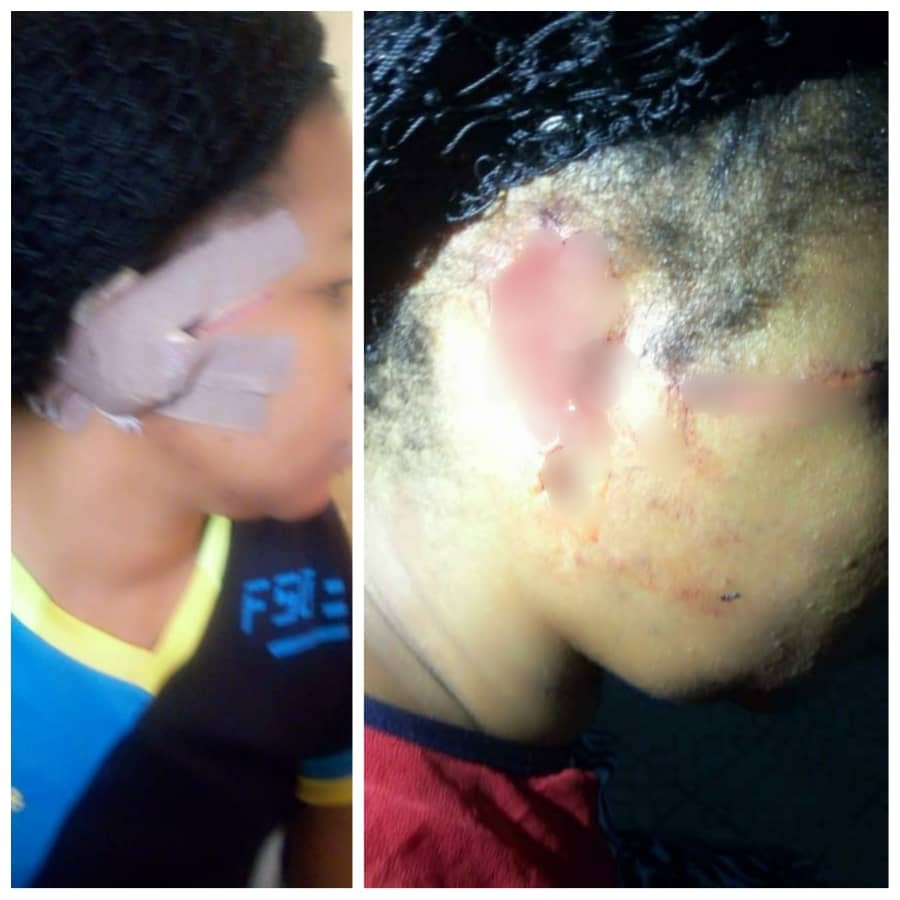 A married woman in Niger state, Dorcas Uange, has lost her right ear after her husband of 17 years, Aduku Sunny White, allegedly bit it off during an argument at their home situated at Kaduna road back of Zuma barracks in Suleja, Niger state on August 28.

Sharing the sad incident with LIB, the daughter of the victim, Agatha, a student of Federal Polytechnic in Bida. said her mother and her stepfather, Aduku Sunny White, have been married for over 17 years. Her mother is the third wife of Mr. Aduku and they have three children together. Agatha said her mother had her from a previous relationship before she got married to Mr. Aduku who is a traditional doctor.

Agatha said immediately her mother got married to Mr. Aduku, he barred her from working and compelled her to become a fulltime housewife. She claimed her stepfather subjected her to emotional abuse, insulting her at the slightest opportunity irrespective of where they find themselves. She told LIB that her mother stayed in the union despite all the sadness and pain her husband allegedly caused her. According to her, she was made to go live with her stepfather’s brother because he never wanted her in his house.

She said trouble started when after a recent quarrel they had, Mr. Aduku called his brother and instructed him to throw her out of his house and allegedly threatened to severe his relationship with his brother if he doesn’t do his bidding

” My mum and my stepfather had some issues and so I went to stay with the brother who is a pastor living in town. He called the brother and asked the brother to send me out of his house and that if he still wants to remain his brother, he should chase me out of the house. The brother had no option, he gave me some money and asked me to leave.

Meanwhile I looked for a one room apartment at Dantata area. My mum said she would come and join me. When she told my stepfather that she was going to look for me, he told her that if she goes out, she should never come back into his house. My mum said yes it is better, she will go.

When she came to meet me, she started looking for work because for the past 17 years they have been married, he stopped her from working and going to school. He just wants her to sit at home doing nothing and if she asks him for money, he will insult her even in the presence of people.” she said

Agatha said her stepfather began calling everyone in their family, accusing her of leaving his home and abandoning their three children with him.

She told LIB that her stepfather was so enraged that he allegedly took her photo and that of her mother’s, did a voice note claiming they were both lesbians and that they absconded from his house to practice lesbianism. Agatha claimed he posted the voice note with their photos on his Whatsapp status and it was seen by many people who downloaded it and started sharing it.

”He took our picture, did voice note and wrote some things, claiming that we were Lesbians. He alleged that I initiated my mother into Lesbianism. He posted it on Whatsapp, looked for my friends and schoolmates and shared it” she said

According to Agatha, she filed a complaint at the Sabon Wuse divisional police station because she feared her school might expel her if they get to know of the false accusation.

”We reported the case. The police went to his house, arrested him and brought him to the station. When the police asked for evidence to prove the allegation of lesbianism, he started pleading, saying he was angry when he made the allegation. He told the police that we were not lesbians and that he was annoyed and that is why he was just looking for a way to spoil my image.” she said

Agatha said after much pleading, she asked the police to release him and withdrew the case only on grounds that he does another voice note where he would debunk the allegations of lesbianism.  She said he agreed, did the voice note, and published it on his Whatsapp status.

Agatha said her stepfather called her mother’s people to inform them that they need to ensure that their sister returns back to his house so she can take care of their three children as his other wife cannot do that. She said her mum spoke with her family and insisted that she will only return back to his house if he will allow her go back to school and start working..

”My mother said before she will go back to his house, she wants to go back to school, have a job where she will leave the house in the morning and come back in the evening and that he should rent a house for her outside because when she was in the house, he will abuse her morning, afternoon and night, accusing her of stealing. He never trusts my mother. Whenever he is eating and his phone rings, he will ask his other wife to come and seat near his food as he doesn’t trust my mother.” she said

Agatha explained that her mother’s relative came from the village to Suleja to see if they could resolve the matter. She said her mother’s older sister and brother who were now like her parents, arrived Suleja on Thursday, August 27. They went for a meeting in her stepfather’s house on Friday, August 28.

She said at the meeting, her stepfather started calling her mother a prostitute. According to her, the older siblings got infuriated by his action and insisted they were going to leave with their sister as they came there to resolve their issues and not create more.

”We were about leaving when he drew my mother back with so much force. She fell on the chair and he jumped on her. He had his mouth on her ears. He bit off the complete ear and spat it on the floor. With tension and fear, we started crying and shouting. He disappeared immediately.

We ran to the nearest hospital in Kerife to see if they would be able to attach the ear back. When we got there, the staff said this was beyond what they can handle. They referred us to Gwagwalada. This was around past 10pm already.

I went out crying to look for a car that will carry us to Gwagwalada. I saw one man who said it was too late for him to go to Gwagwalada but that he would be able to take us to Suleja hospital but that we will have to pay him. I said no problem. He drove us there, we paid him but the hospital said they could not treat her because he uprooted the ear completely.” she told LIB 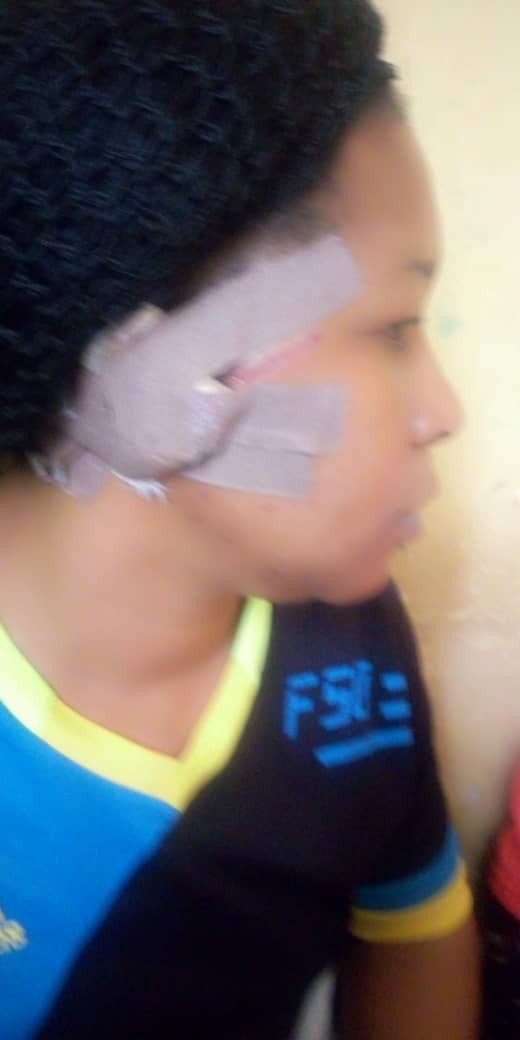 ”On getting to the new hospital, they told us that the doctor wasn’t on sit until tomorrow morning. We cried like we were not going to cry in this life again. Since it was an emergency, we said let us try another hospital. This was few minutes past 11pm. We came out of the hospital, there was no car going to town.

We saw one man, we begged him to carry us. We didn’t even tell the man that we didn’t have transport again because we knew he would not carry us. We said take us to one hospital that is close to my working place.

On getting there, I told my people to take my mother inside while I started begging the driver. I explained to him that we were not having any money on us and that if had told him, he would not have carried us. The man said there is no problem and left us alone.

Getting into the hospital, the doctor said he cannot sew the ear back since it was completely uprooted and that the ear was already dead. He said what he can just do is to treat the face of the wound, give her some injections and pain relief and just seal it up.

We didn’t have any other thing to do than to bury the dead ear.”

Agatha said she reported the matter to the police who invited her stepfather. He has been arraigned before a Sharia court in the state but Agatha says she is not convinced her mother will get justice with the way the court is handling the matter. She says her stepfather has been released by the police as they claim he cannot be detained for more than 24 hours.

She said she and her mum visited the National Human Rights Commission in Abuja on Tuesday, September 1 but were asked to make their complaint in writing and that there were several other persons before them who need to be attended to.

She is seeking justice for her mum.

LIB contacted the spokesperson of the state police command, Abiodun Wasiu for his comment. He promised to revert as soon as possible. 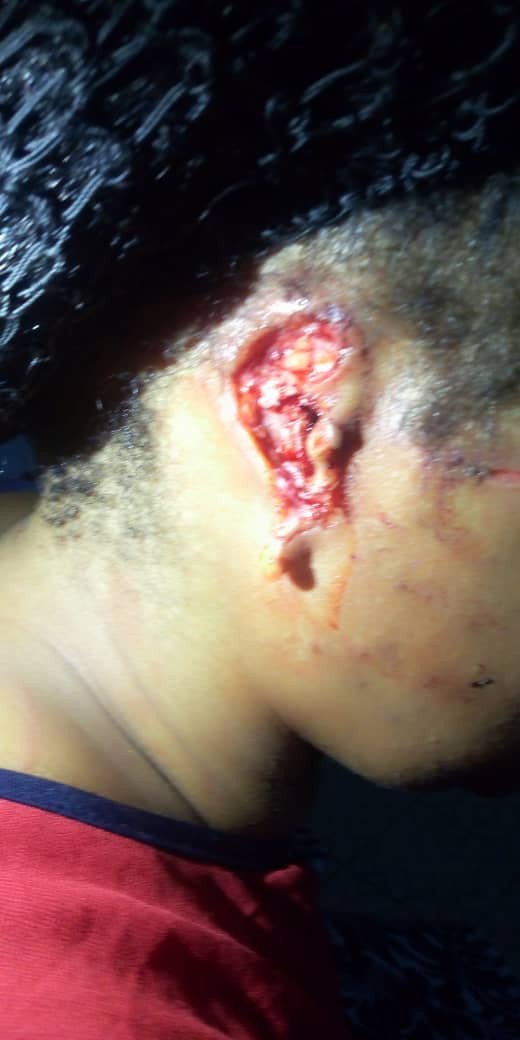 The post Husband bites off his wife’s ear in Niger state (graphic) appeared first on illuminaija.