The clash between Tacha and Mercy Ike seems unending as former Big Brother Naija housemate Tacha took to her social media page to shade Mercy Eke over her birthday photoshoot.

Mercy Eke who is celebrating her 27th birthday today September 29th has taken to her Instagram page to share stunning photos of herself to celebrate her birthday. The rival of Mercy Eke has however taken to social media to throw an indirect shade at Mercy.

YOU MAY ALSO LIKE  J. Cole announces Dreamville 2020 Festival

Tacha also revealed in her post how she tried following Mercy on Instagram only to discover that Mercy had placed her on her blocked list on three consecutive times.

Commenting on one of her Photoshoot, Tacha wrote;

“I can’t believe clout is asking for a PHOTOSHOOT!!? This life….. She blocked me 3x on a role 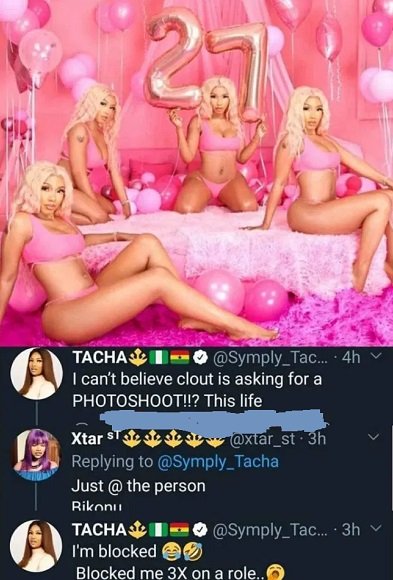 The post “I Can’t Believe Clout Is Asking For Photoshoot”- Tacha Drags Mercy Eke Over Her Birthday Shoot appeared first on illuminaija.