Nigerian billionaire daughter and Disc jockey, Dj Cuppy has vowed to make a million dollars this year and there’s absolutely nothing that can stop her.

Cuppy is one of the few artistes born with a silver spoon but still works hard like she has nothing. The “Gelato” singer who has been away from the country took to her Instagram story to share a picture of herself working on the plane and vowed to make a million dollars which approximately 360million naira in the new year by all means. She captioned the photo, “Working woman. Im making $1million this year by all means”

YOU MAY ALSO LIKE  Afenifere Should Stop Dabbling Into Politics, Remain Socio-cultural -Bode George 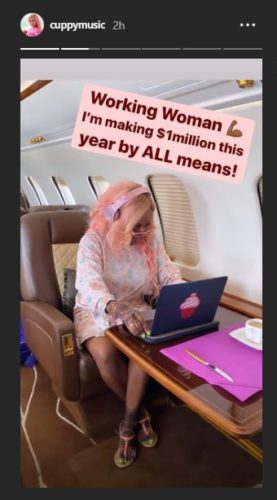 The post “I Must Make One Million Dollars This Year” – Dj Cuppy Vows appeared first on tooXclusive.