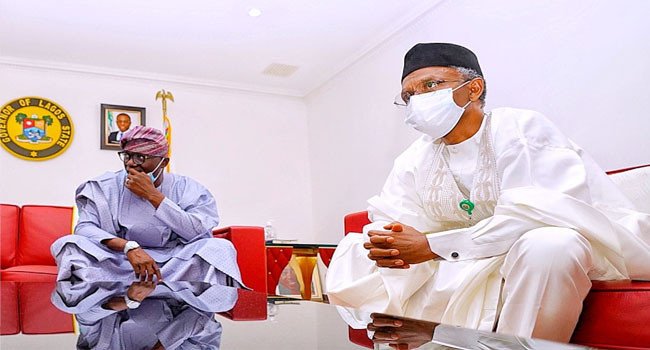 Governor Nasir El-Rufai of Kaduna State has disclosed that he nearly cried seeing the level of destruction in Lagos following the violence that erupted during the #EndSARS crisis.

The Kaduna State Governor agreed that expressing anger over issues is the right thing for people to do, but he faulted the destruction of public properties, describing the recent incidents in the south-western state as a setback.

El-Rufai who accused those who “thrive in violence” of infiltrating “the protest to achieve their agenda of wreaking a large-scale destruction on public assets and infrastructure in Lagos”, averred that Governor Sanwo-Olu did all he could to prevent the protests against police brutality from taking a violent turn.

He was quoted saying during the visit to the Lagos state Governor;

“I have spent time to see some of the pictures of the destruction done on public properties in Lagos and I nearly shed tears.

“The Government of Lagos and the Federal Government will have to re-invest scarce resources that could have been used for other things to rebuild the vandalised facilities.

“Anyone who cares about development and progress will cry after seeing what has been done to public facilities and people’s investment that provided jobs to youths.”

The post I nearly shed tears seeing the destruction of properties in Lagos – Governor El-Rufai appeared first on illuminaija.