Controversial radio and television personality Afia Schwarzenegger has hit back at her former close friend Nana Tornado after he teamed up with Mzbel to fight her.

Nana Tornado during a live video with Mzbel revealed that Afia Schwarzenegger upon all her bragging on social media is not able to take care of her father who is in Kumasi.

According to Nana Tornado, Afia’s father is 82 years old and instead of him to stay home and enjoy the fruit of his labour, he goes to sit by a pharmacy shop in Kumasi just to make a living.

He didn’t end there as he played an audio where a man he(Tornado) claimed to be the fridge repairer of Afia Schwarzenegger father where he was heard saying the room of Afia’s father contains old stuffs.

Well, Afia has responded to the allegation from Nana Tornado where he revealed that what Tornado was saying the video are lies.

Afia Schwar in responding to a social media user explained that she used to take care of Nana Tornado, his daughter and Tornado’s mother during their good days so why would she neglect her own family.

She follower quizzed: “So why were they saying you can’t post your dad and take care of him ei”

Afia schwar responded: “I was taking care of him, his daughter and mother ..and I will abandon my parents?? I take care of orphans and abandon my family..They are confused n bitter becos I say I no go do again!!!” 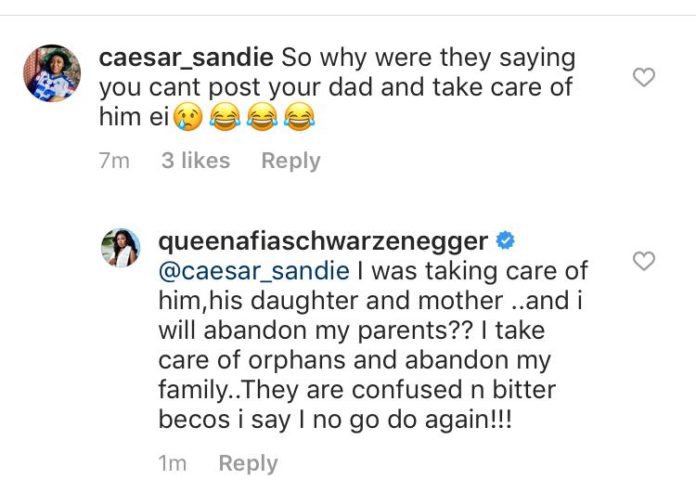