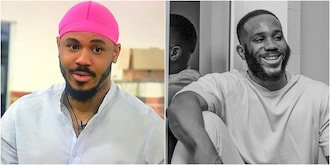 BBNaija star Ozo has reacted to a statement by Kiddwaya that he wants to be like him.

The billionaire son made the statement after he was evicted from the house and answering questions about his relationship with Nengi.

A few days after his eviction, Ozo, during an interview with Beat FM, said that the only person he wants to be like is his father.

“If only you watched the show, you’ll know that the one person I want to be like is my father,” he responded.

Noting that he knows that the show wasn’t a love programme, Ozo went onto explain that when he was going in for it, his family told him to be open-minded.

YOU MAY ALSO LIKE  Chioma is enjoying a lot of attention, Davido well done – Tiwa Savage says

He stated that he just happened to meet a lady that he deeply cares about.

Following his response to the question from the interviewer, Nigerians took to social media to react to it. Many hailed him, noting that Ozo’s response was classy.

The post I want to be like my father, Ozo says as he reacts to Kiddwaya’s statement about him appeared first on .