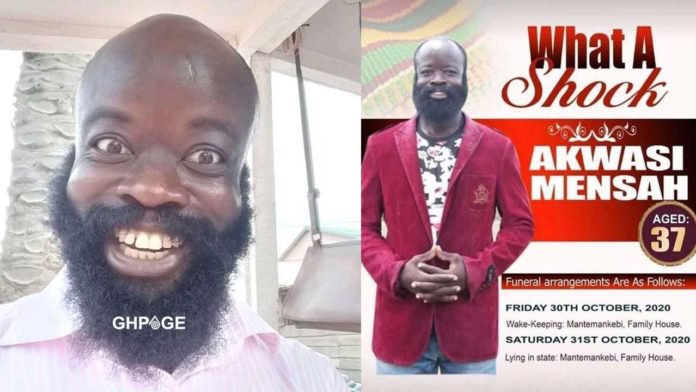 Barely 24 hours after the news went viral that Popular Kumawood actor Sekyere Amankwaa aka Otali has died, the actor has spoken.

According to the actor, he is not even sick to talk of being dead as reported on social media and by some colleagues.

He claims that the obituary is a scene in a movie they are currently shooting and it was never meant to be out.

He further explained that it was the graphic designer who worked on the flyers that leaked the obituary flyer on social media.

Otali denied leaking the photo on social media for hype and wandered why people will think he will do that.

The Kumawood actor was speaking with Joe Shortingo, a colleague actor who reached out to find more details of the viral report.

Before Ghanaians could confirm the news, other Kumawood actors and actresses including Christiana Awuni took to social media to share the sad news.

Before he even came out to speak, it was revealed by insiders that the news was false and he faked it himself for hype.

The post I was betrayed- Kumawood actor speaks after reported dead appeared first on illuminaija.