Actress and film maker Yvonne Nelson has once again reiterated that she is not ready to settle down upon several calls from her fans and followers to settle down since she is no more getting younger.

In the actress latest reaction, she disclosed that marriage isn’t an achievement and people shouldn’t see it as such.

She made this comment after a fan on social media adviced her to get married since is getting old and questioned if that was what being famous comes with.

The fan commented: “Yvonnenelson won’t you marry you are getting old is this what being famous brings.”

The Heels and Sneaker actress in her reaction responded by saying “Marriage like i always say isn’t an achievement for me. Real love, kids, an education and happiness are! You cant tell me how to live my life. The SOCIETY you wanna please so much will kill you oneday. No one cares about you anyways. I’ll LIVE the way i want it. I can do the so called marriage when it feels RIGHT TO ME”. 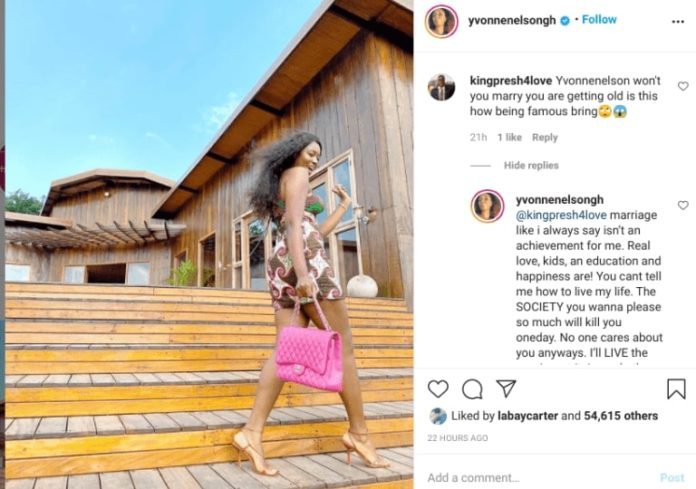 On October 29, 2017, Nelson gave birth to her daughter Ryn Roberts with her ex-boyfriend, Jamie Roberts.

The actress remained silent about rumours of her pregnancy until she announced the birth of her daughter through a WOW Magazine Cover.

The post I will marry when I want to – Yvonne Nelson replies fan concerned about her marital status appeared first on illuminaija.