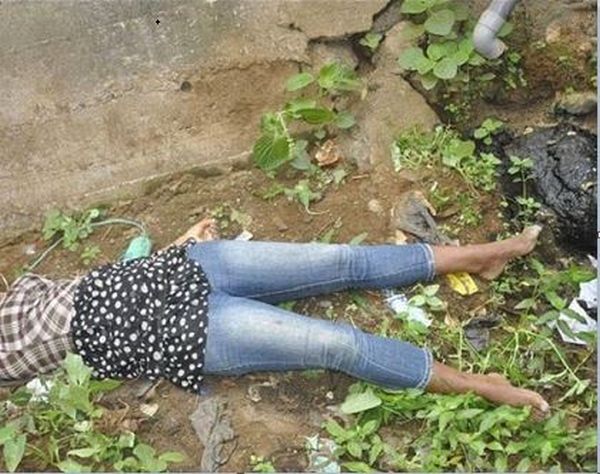 The pregnant woman raped and murdered by suspected Fulani herdsmen at Nchatancha in Enugu East Local Government Area of Enugu State, has been identified as Mrs Regina Mba.

9jaupdate247 reported earlier that the widow was murdered by suspected herdsmen after harvesting cassava from her farm on Wednesday August 21.

Corpse of the deceased was found in a bush near a stream, after the villagers organized a search party to look for her.

Upon visiting the farm on Wednesday, the search party only found the wheelbarrow Regina took to the farm. The community however received information that the mutilated corpse of a woman was dumped by the Asaba River on Thursday.

One of the community leaders, Ejike Nnaji told newsmen “When the youth rushed to the place, they discovered that the corpse was that of the missing woman.

“We saw several machete cuts on her body, including the head and neck, and her pants removed; we are suspecting that she must have been attacked and raped by the bandits in the bush.”

Security operatives were deployed to the area after the incident led to a protest and destruction of properties. Giving an update on investigation into the murder incident, Enugu State’s Police Public Relations Officer, Ebere Amaraizu appealed to aggrieved residents to be calm.

“Following the report of the incident of alleged murder of a woman on a farm in the Nchatancha community in Emene, Enugu State, which was received by the command today (Thursday), the Commissioner of Police, Sulaiman Balarabe, has directed a full-scale investigation with a view to establishing what actually happened and the persons involved and their motives, among others.

“The command further advises members of the public to continue to be law-abiding and avoid any thing that will truncate the existing peace and security in the state as security operatives will leave no stone unturned towards unmasking those behind the dastardly act.

“Meanwhile, the corpse of the deceased woman has been deposited in the mortuary of the Annunciation Hospital for autopsy”