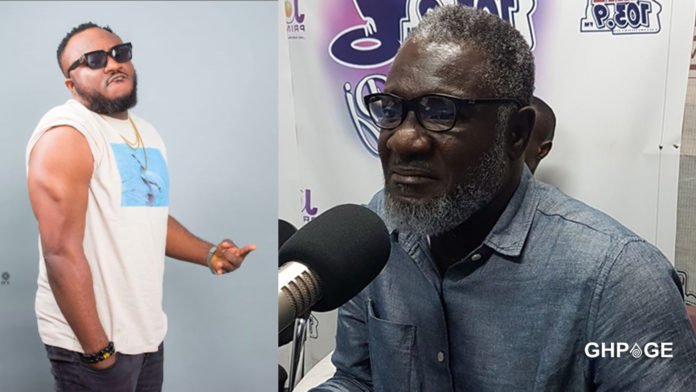 Self-accliamed King of Comedy in Ghana Derrick Kobina Bonney known in showbiz as DKB has taken to social media to mock the father of dancehall sensation Ebony Reigns known as Nana Opoku Kwarteng aka Starboy Kwarteng.

His action comes after Starboy Kwarteng revealed that people he employed to help him take of his ‘Bony to the World’ record label rather ended up stealing from him.

According to him, since he is new in the industry and needed people to help him keep the legacy of his late daughter alive and to work on other artistes he called on people to join him start a label.

At the launch of the label, he unveiled one artiste Kim Maureen stating that she was going to be the first artiste to be placed on the label and push it high but it turned out that things didn’t work for Starboy Kwarteng as he planned.

YOU MAY ALSO LIKE  Controversial Cameroonian Singer; Dencia Blasts Don Jazzy For Attributing Mercy’s BB Naija Win To Her Buttock

But DKB in reacting to the viral story of Starboy blaming people saying that they stole from him revealed that it served him right.

According to DKB, he is very glad and happy this happened to Starboy Kwarteng whom he described as a greedy person.

He made this comment under a post on Hitz FM presenter Dr. Pounds timeline on social media.

He posted: “I’m so glad. Greed can never cheat nature. I’m so happy. I’ll have a nice day today” 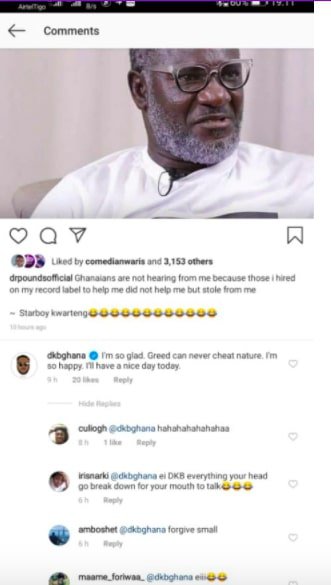