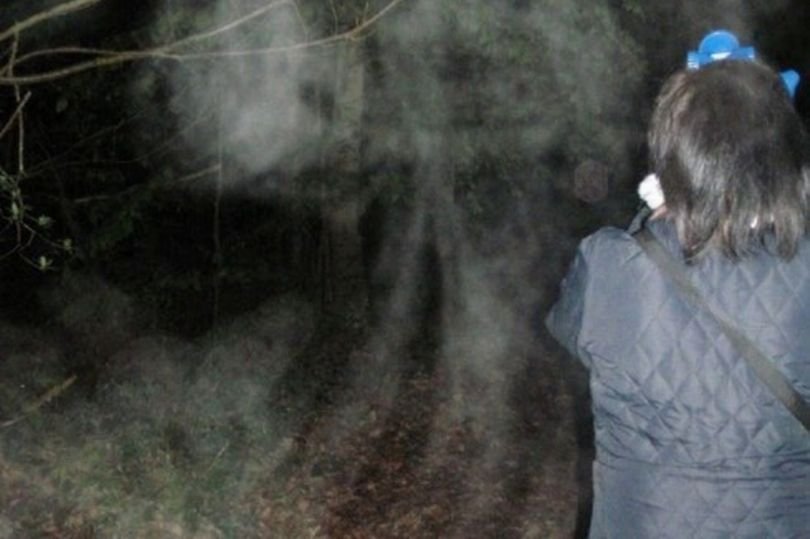 Pluckley in Kent looks like your typical, quaint English village in the daytime.

But don’t be fooled by its adorable exterior, because after dark the village turns into a very spooky place.

If you’re scared of ghosts, this may not be the place for you to visit this Halloween.

The village is nestled in the Kent countryside, with just 1,000 residents who live in a mix of adorable cottages and picturesque country homes.

But in addition to the living residents, the village is said to be home to 15 ghosts, according to the Mirror.

One of its many haunted sites is the Screaming Woods, which has attracted many brave tourists in recent times, with people camping under the canopy of trees.

There have been several reports of the sound of screaming men and women after dark.

They are said to be the sounds of those who died while getting lost in the woods.

Elsewhere people claim to have spotted everything from ghostly horse-drawn coaches, to hanging bodies.

In the haunted graveyard people claim to have heard screams of agony from a dying man to a grieving mother.

Here are some of the other spooky and unexplainable sightings from Pluckley.

The aptly-named Fright Corner is a road in Pluckley where the ghost of a highway man is regularly spotted.

It’s believed he is the ghost of a highway man who was killed in the 18th century.

Apparently he got into a fight with those in charge of keeping peace in the village, and they pinned him to an oak tree with a sword.

Ghost-watchers claim that the sword-fight is re-enacted – always with the same consequence.

The woods may seem like the perfect place to go for a stroll, but according to reports Dicky Buss’s Lane should be avoided.

There have been reports that the corpse of a teacher has who hanged himself has been seen.

According to rumour, he took his life after World War One, and his body was found by the miller Dicky several weeks later.

To this day, people claim to hear the chilling screams of agony from the site of the brickworks.

Here an unlucky brickwork met a horrific end when he was crushed to death by a wall of clay.

The spine-tingling sound of horses hooves are said to be heard by people in Pluckley regularly.

A babysitter once reported seeing the coach with light pouring out of its windows, with horses pulling it along.

In 1997 a driver almost crashed because they heard the clip-clop of hooves on cobbles while driving on a tarmac road.

5. Red lady in the grave yard

A cemetery is spooky on the best of days, but Pluckley’s will make your blood freeze.

The Red Lady is said to haunt the graveyard of the local church, St Nicholas.

Lady Dering was buried there in the 1100s, in a coffin made of lead with a red rose placed on top.

Locals have seen her wandering the graveyard searching for the grave of her stillborn baby.

The picturesque Pinock Bridge is a great spot to sit and take in the stunning surroundings.

But you might not be alone, as it’s said to be haunted by a gypsy woman.

She is said to have made her living by selling watercress she collected from the stream below.

The gypsy has been spotted sitting on the bridge smoking a pipe in the spot where she lost her life after being accidentally burned to death.

Three terrifying ghosts are said to haunt the atmospheric pub The Blacksmith’s Arms.

Among the figures sighted here are a Tudor maid, a coachman and a Cavalier.

Richard ‘Dicky’ Buss, who is said to have found the body of the hanged teacher, is now said to haunt the village’s abandoned windmill, The Pinnocks.

Dicky closed the mill in 1930, and nine years later it was destroyed by a storm after it was struck by lightning.

YOU MAY ALSO LIKE  SO SAD!! See More Photos From The Rescue Operation At The Scene Of The Lagos School Building Collapse

He is now said to be haunting the spooky location – and is normally spotted just before a thunderstorm hits.

A ghost dubbed the white lady is said to stalk St Nicholas church, as well as the library of her old family home, Surrenden Dering.

The grand house was destroyed in a fire in 1952, but her spirit has reportedly been seen from the US embassy, who used the property as a base between World War One and Two.

Another man who took his own life is said to haunt Pluckley.

A colonel who hanged himself in Park Wood is said to have been spotted wandering among the trees.

Much of the area has been cleared, but his spirit has remained.

The mistress of Rose Court is said to have taken her own life by eating a handful of poisonous berries.

The house looks like a lovely village home, and is 250 years old.

Two haunted pubs isn’t enough for the most haunted village in Britain.

The Derring Arms used to be a hunting lodge, and is now said to be home to a ghost of a woman wearing a bonnet.

She has been spotted by many customers, and her spirit is so clear she has been mistaken for a real drinker.

The post Inside The Most Haunted Village In Britain Where 15 Ghosts Roam About And Chilling Screams Can Be Heard appeared first on illuminaija.