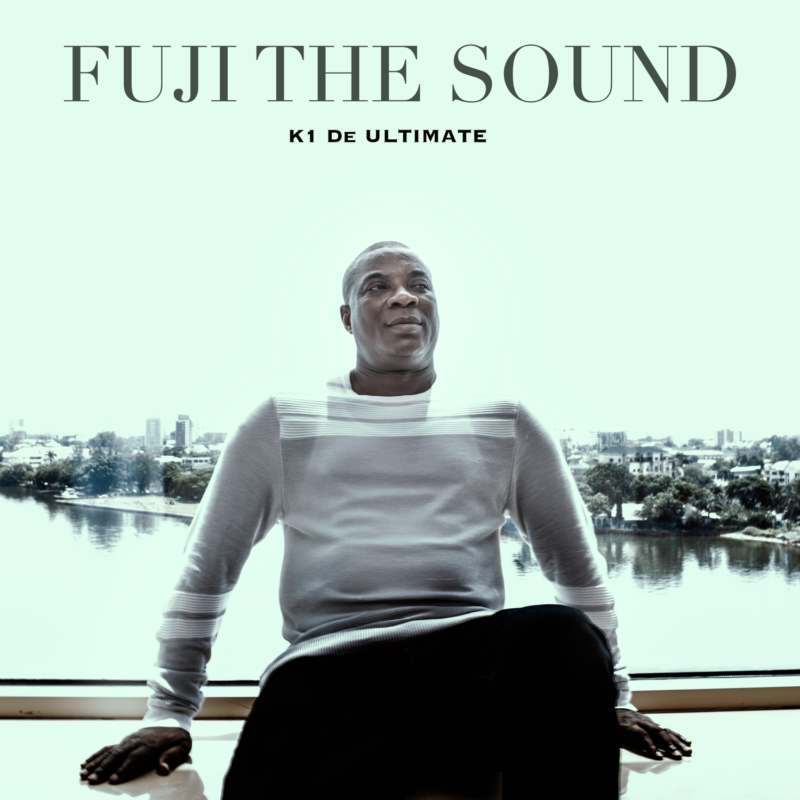 The Older The Berry, The Sweeter The Juice, K1 De Ultimate Excels On “Fuji The Sound” – The Review

On the 21st of August, 2020, Fuji icon, K1 De Ultimate set an unforgettable record in the history of Fuji music, The legendary singer released one of a kind project – an Extended Playlist [EP]  titled “Fuji The Sound.”

It is public knowledge that the singer has been in the music game for years. He successfully created a brand of the fuji genre that appeals to all age groups, irrespective of tribe and background. His career of over 40 years has been blessed with an enormous amount of hit tracks, no wonder he’s one of the most loved and respected acts in the history of Nigerian music.

Although the highly anticipated body of work is not a fresh project as it features the remake of a collection of tracks that earned him his titled as the Ultimate King of Fuji. To show that he is not just the King of Fuji music in name only, he released this iconic project which houses 6 tracks with guest appearance from singers, Toby Grey and Teni.  The project is filled with different moods, whether you want to dance, reflect, or just catch a good vibe. His position in the game is not in vain as this is a consecutive guaranteed hit following closely after its release has garnered over 500k streams.

It also has production assistance from, Mystro and Femi Leye. Making the announcement on his social media page, “To all my fans around the World ? I will be putting out an EP project for your delight on August 21 . But On 7th of August 2020 a single off the EP titled AWADE will drop to celebrate ileya festival while the entire body of work will be out subsequently. I must give Glory to God for making all this possible without him we are nothing in this world . Special thanks to everyone that contributed to the success of the work. – K1 De Ultimate #FUJITHESOUNDEP”. Cutting the long story short let’s delve deep into the main business of this write up which seeks to give a review of the project.

Released as the first single off the body of work, “Awade‘ for fans to celebrate the ileya festival, it has always been a classic song. On this EP, Mystro experimented with an amazing array of melodies like rock, the regular fuji sound, and a calm soothing orchestra opera kind of vibe which in return gave the track a heavenly vibe. The track originally is quite long but KWAM 1 was able to shorten without diluting the message he is trying to pass across. Lyrics like “omo gidi sa lo ye ka ya, ka si tun je ari koserere” which  urges everyone to be of good character in order to stand in as a role model to others.

Interestingly, the singer who is known to be a devout Muslim quoted a verse in the bible. “Behold, I have set the land before you and go in and possess the land in which the Lord has sware unto your fathers; Abraham, Isaac, and Jacob. The Lord your God has give unto you The Lord your God has multiplied you and behold ye at this day as the stars of heaven as multitude”. Deuteronomy 1:1-10. K1 has not only proven to be a Fuji musician alone but also to be a religious activist as well.

This has always been one of his party starters which is a remake of his track titled “Agbo Mabiwon”. On this EP, its a mid-tempo monster remix with an incredible beat. Mystro did magic on this tune by infusing a pon pon beat with the fuji sound. KWAM 1 steps into a groovy mood and expresses the meaning and reason for putting out this whole body of work. ”Fuji mi iseyin o, EP EP, Fuji mi iseyin o, Extended Play.

It also has a fresh vibe with catchy lyrics that would give Naira Marley or Zlatan a run for their money. “Omode yi o njo, Onju di gbagbagbagba, On se owo papapapapa, uJi mi iseyin o”, “O ju’di pa pa pa pa pa, O s’owo ma ma ma ma, Ota, Ota ko ni ya f’oko…” . In English, KWAM sings about a beautiful and endowed woman who is seriously shaking her butt. Even if you are not a sucker for vulgar words, this track would make you forget that.

Just like the title; “Majo Nisho” which means “Keep Dancing”, K1 indulges his music fans not to dull themselves, by dancing to the tune. “I can’t let the music waste just like that, I must dance,” He sings about how talented he is when it also comes to dancing and not only in singing. He sings to a lady to get on the dancing floor with him, show her talented dancing skills and implores her yo keep dancing and shaking her buddy. “Baby mii ma dull ara e, Keep shaking your booty, Its dancing time men“

This writer feels this track should have been lengthened than 3 minutes, after all it comes with a banging sound and party vibe. Shout out to the “Yoruba Demons” and the ladies with gigantic geles that like to turn up at Owambes, KWAM 1 just gave y’all another party starter.

K1 teamed up with sensational singer, Toby Grey to deliver a more contemporary version of this emotional record which its no doubt perfect for lovers. The slow-tempo ballad delves deep into how lovers who live apart or are in long distant relationships sometimes pine uncontrollably for each other. He dedicated this track to the love of his life who is far away from him, urging her to come back home, expressing how much he has missed her.  “I cant Just Stop Thinking About You My Love”. Word on the street is that this song was released at a time foreign love songs were gaining prominence so it was the perfect track for men to woo ladies and also to cheat. Very fascinating I must say because it shows that the old folks also got game.

Interestingly, KWAM switches up from singing in Yoruba as he sings passionately in French alongside Toby Grey. The singer, on her part, blended with the instrumentals by delivering an outstanding verse that spiced it up. Like really, French just does something to love songs. Another classic love song rebranded just in tune for this new generation.

This track is dedicated to the appraisal of our country Nigeria. K1 appreciates the country and reveals how much he misses home whenever he is away. He further revealed that anywhere he is in the world, he will never forget his abode which is Nigeria.  K1 brings us hard-hitting fuji vibes, switch to urging all Nigerians to be patient, and endure till the country gets better, that its just a matter of time. He sings that we can only get the country better by uniting together.

In the original track, it was released to lambast the laziness and waywardness of the Nigerian youth and also to educate the youth on unprotected sex. The spread of HIV was rampant so this was directly attacking the issue in the country. On this new version, the message didn’t change and it almost feels like he saw the future as he emphasizes more on celebrating the Nigerian identity.

Teni channels the “Makanaki” vibe blending with her impressive vocals which pleasurably tickles the senses. The track “Omo Naija”, engages the listener in an auditory experience with its rhythmic beats. This record proves to further cement his incredible music career and further secures K1’s title as the ‘King Of Fuji Music’.

The track at the beginning is simply KWAM 1 saying “if you are good to me, God will surely bless you” and for the remaining minutes of the track, he raises himself for being the king of Fuji music.

In the 90s and early 2000s, Fuji was the reigning genre especially at owanbes and even burials ceremonies. Any party without Fuji music blasting the speakers is not a true Owambe because it’s one of the main ingredients for a successful party. However, the incorporation of Pop, Hip-Hop, RnB diverted the attention of music lovers and now the Nigerian sound is evolving but only a few artistes have noticed this change and have stepped up their game.

While some new generation artistes have failed to understand this new development and failed to keep up, KWAM 1 has exceeded expectations. Despite being over 60 years, his game hasn’t changed and the older generation can attest to this.  “Fuji The Sound” is an amazing EP that would not only attract the attention of the new generation especially those that don’t even like Fuji at all because he delivered fuji in an electrifying and exciting fashion just like the way Zlatan or Rema would. Okay so I might be going too far with the Rema thing but you get the picture, it was specially tailored for the new guys to enjoy.

Personally speaking, my relationship with Fuji music didn’t hit off immediately despite the fact that it was played in every nook and cranny of my household while growing up. This was probably due to the fact that my knowledge of the Yoruba knowledge wasn’t that deep but as I got older, the love for the genre blossomed and even earned the nickname “Ancient Of Days“. The release of this project has helped further intensify the love because its come in a form that everyone would enjoy.

The EP is also a remarkable eye-opener to how the singer has evolved and adapted to the new sound that’s now reigning. He blended perfectly with the new wave that no words can truly describe how amazing this project is. Although, there some glitches here and their ith the mixing and arrangement of the tracks, KWAM 1’s vocals covered up the flaws. This project has this writer itching for a “Fuji The Sound Vol 2” which houses his other hits tracks.

K1 is an example of the saying that; ‘‘The Older The Berry, The Sweeter The Juice’. Despite being a fuji singer, K1 has proven his versatility in the game with this new project.