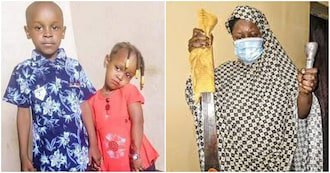 A Kano-based woman accused of killing her two children over squabbles with her husband’s second wife has claimed she was hallucinating when the incident occurred.

The suspect, Hauwa’u Habibu was arrested shortly after the alleged attack with a machete and pestle occurred on Saturday, October 3, The Nation reported.

She, however, claimed that she was not in the right frame of mind when the alleged attack on the six and three-year-old kids happened.

The suspect told the police that she was possessed by spirits and was out of her mind.

“I am not even aware I killed my children. I saw my son and daughter attacking me with a knife and another weapon. I called my husband and told him what was happening but he didn’t believe me.
“So I locked the house and escaped to my mother’s house for safety. The next thing I know was my husband coming to my mother’s house with bloodied clothes saying I killed the children.”
Hauwa’u was also alleged to have attacked a third person, her nephew, who survived.

But her husband, who took a new wife three months ago, dismissed her claims of mental illness.

According to him, whoever said his wife is possessed by spirits or has a mental illness is lying.

The post Kano-based woman claims she killed her children under hallucination appeared first on .