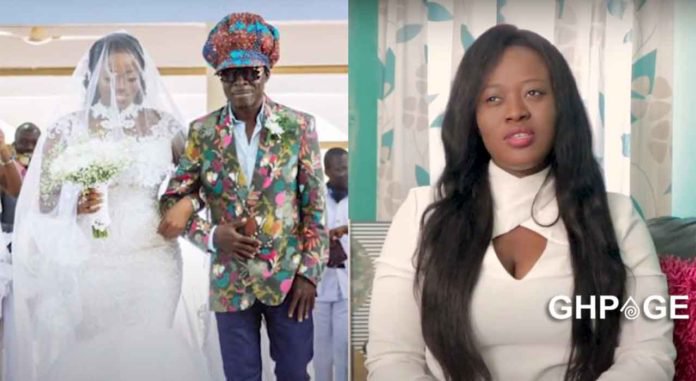 A lady who happens to be a huge Kojo Antwi ‘stan’, speaking to Graphic Online, has recounted her beautiful wedding experience when the Highlife legend walked her down the aisle.

The young woman who goes by the name Mrs. Efia Antwiwaa Kajah Dayira spoke about the impact of the legend’s music had on her life.

Efia mentioned that she met Kojo Antwi when the musician came to a banking hall where she used to work at for a transaction.

”I met Kojo Antwi in 2017 when I was doing my service at one of the banks in Ghana. He came to our banking hall, and I was playing his music. A friend came to tell me, Kojo Antwi is here and I was so eager to meet him not knowing he was coming to my end. So he brought the cheque to me and when I saw him I was stunned. I left my teller box to meet him and I had goosebumps all over”, she said.

YOU MAY ALSO LIKE  Ashly x Sami Boi – “Regular” (Prod. by Rexxie)

According to her, Kojo Antwi’s music played a huge part in her life helping her to rise above her fears.

The gorgeous young lady said it was her dream for the ”Music Man” to walk her to the altar so she sent him a message to that effect receiving a maybe for a response.

She added that ”He said he was going to be busy so he couldn’t assure me he was going to come. I felt really sad on the day. Two days later he called me and asked for my dad’s number. He called my dad to seek his permission to walk me down the aisle and my dad said yes. He told my dad not to say a word”.

Efia concluded by telling her surprise at seeing Kojo Antwi waiting for her at the door to the church on her wedding day and how special that moment was for her.

The post Kojo Antwi walks his biggest fan down the isle on her wedding day appeared first on illuminaija.