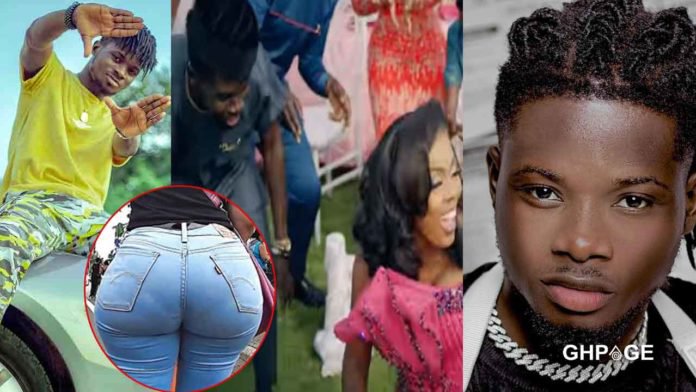 I guess you’ve wondered for a long time the meaning of the ‘Wele, Sebe, Kontomire’ lyrics Kuami Eugene used in his Open Gate song that is already making waves across the country.

You might have drawn personal conclusions from the lyrics based on how you listened to the music. Others still don’t understand why he used that particular line in the song.

At a point, many thought Kuami Eugene copied the footsteps of Patapaa and Stonebwoy’s recent release of the gibberish songs ‘Skopatumana and Putuu’ respectively.

Well, from the horses own mouth, the Rockstar Kuami Eugene has explained the meaning and usefulness of the ‘Wele, Sebe, Kontomire’ line in his Open Gate song.

He said the ‘Wele, Sebe, Kontomire’ lyrics in the song is a pure attribute to a woman with big booty. According to him, the lyrics are rhythmical to the walking of women with big A$$es.

{So now a quick one, imagine any friend, lover or any random lady you know with fat a$$ walking. At every step, one butt shakes, good! Did you get it? I like how you are flowing with me. Next step, sing the ‘Wele, Sebe, Kontomire’ line in your head as she walks to the tune. Afa! You see it’s ‘flowing’ with her walking}

And I added in the music because it’s related to marriage, the bride will walk on the aisle in a manner that he(husband) in the song will want to see like how the lyric goes”

WATCH THE VIDEO BELOW;

Wele, s3b3, kontomire – Kuami Eugene explains what it means in the the song.

The post Kuami Eugene explains the meaning to the slangs(Wele,Sebe,Kontomire) he used in his song appeared first on illuminaija.