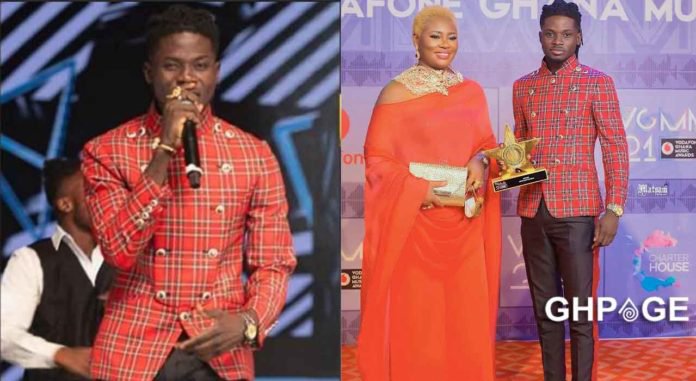 Kuami Eugene has dropped a hot freestyle in celebration of his Artiste of the year award at the just ended VGMAs as he hit out at his critics.

While in an interview on the Daybreak Hitz show with host, Andy Dosty on Hitz FM, the Rockstar spoke about his big win and what it meant for his brand.

In response to Guru who stated earlier that his win is indicative that the Vodafone Ghana Music Awards is not credible, Eugene mentioned that the former is entitled to his opinion.

”If Sarkodie had won there would be people who would say he did not deserve it. On the other hand, there are people who also think I have worked hard enough for it. It is just opinions. Ghanaians are opinionated and we like to speak our mind”, the Lynx signee expressed.

YOU MAY ALSO LIKE  SERIOUS TALK! Can You Tell Us The Useless Courses You Won’t Advise Anyone To Study In Nigeria?

However, Eugene ended the conversation by dropping some bars on Dead Peepol and Rich Kent’s Otan Hunu beat.

Kuami Eugene’s versatility as an artiste is only to be commended as he threw subliminal shots at all his critics and haters in his freestyle.

The post Kuami Eugene responds to haters by dropping a hot freestyle appeared first on illuminaija.