Hiplife artiste Kwaw Kese has called out two of his colleagues Samini and Sarkodie for endorsing a political party ahead of the upcoming elections which is some few weeks away.

According to him, Samini and Sarkodie are political artistes who have chosen to endorse the NPP just to make money this period.

The ‘Dondo’ hitmaker took his followers back to 2016 where he stated that Shatta Wale made a lot of money after he somehow endorsed the NDC with his Mahama paper song. 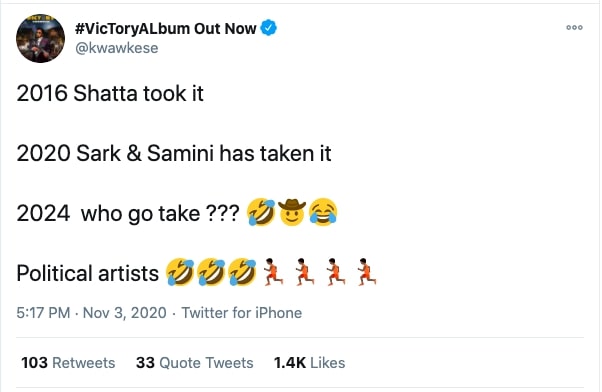 Sarkodie released a song with Lynx Entertainment signee Kuami Eugene titled Happy Day where he called on Ghanaians to give Nana Akuffo Addo the nod to stir the affairs of the country for another 4 years.

Samini on the other hand also dropped a song titled ‘kpoyaka’ where he listed some achievements of the current government and asked that Ghanaians should vote and retain them in government again.

However, the flagbearer of the biggest opposition party John Dramani Mahama has stated that he is not bothered with the top celebrities endorsing his opponent and has asked that no celebrity openly comes out to endorse him due to the aftermath of every election.

YOU MAY ALSO LIKE  BBNaija: Laycon Almost Died Because Of Erica – Vee

Shatta Wale is my target, I don’t mind working with him on a song– Patience Nyarko